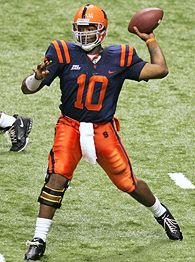 "That was the lowest point," Patterson said. "Nothing was going on. It was a horrible day."

There have been plenty of those in Orange country over the past four years, but if you squint hard enough, you can see a small ray of light emanating from the Carrier Dome.

When Wyoming pays a visit Saturday, the Orange (2-2) will be seeking their first three-game winning streak since 2002. They already have doubled their win total from last season, when they finished 1-10 to become the first double-digit loss team in the program's 116-year history.

It wasn't fun for anyone, particularly linebacker Kelvin Smith, who had to fend off jabs from several notable Syracuse alums, including Philadelphia Eagles quarterback Donovan McNabb, Indianapolis Colts defensive end Dwight Freeney and Smith's uncle, Tennessee Titans linebacker Keith Bulluck. Smith recalled those guys looking at him as if they were disappointed fathers.

Today, the vibe is much different under second-year coach Greg Robinson, who replaced Paul Pasqualoni.

"For the first time, I feel like the whole team is one," said Smith, a senior. "There are no little groups here and there. Everybody feels the vibe, like it's a special time. Everything's clicking."

That might be a stretch, considering Syracuse's modest two-game winning streak came at the expense of Illinois and Miami (Ohio), which are a combined 1-7. Before that came a loss to then-No. 14 Iowa, in which the Orange failed to score in overtime on seven tries from inside the 2-yard line. The 34-14 victory over Miami last Saturday snapped Syracuse's five-game home losing streak.

The Orange have some extra motivation Saturday, courtesy of Wyoming tailback Devin Moore, who popped off after his team's 31-24 loss to Air Force last weekend. Wyoming is 1-3.

"I'm going to guarantee a win next week against Syracuse, and every other conference game," Moore told local newspapers. "I don't want to be cocky, not at all. But I do have confidence in the Wyoming Cowboys, and I hope everybody else out there does, too, because we're going to win. And that's the bottom line."

Smith chuckled when that was relayed to him.

"That's pretty funny," Smith said. "He's going to shoot himself in the foot. Good luck to him. I can't wait to play against him."

Syracuse fans, clearly, are in prove-it-to-us mode. Average attendance for the first two home games was 36,237, down about 4,000 per game from last year. The team's current three-game homestand began against Miami and will finish with the Big East opener against Pitt on Oct. 7.

"I've made the statement several times: If we build it, they will come," Robinson said. "I think it's our team's responsibility to show them we have the kind of team they want to follow. The people who've been in that dome, it's been wild. It really has. The students have been outstanding. I just think we have to keep producing, keep showing them we are the team they want us to be."

Patterson didn't blame anyone for staying away.

"It's human nature that nobody wants to be associated with a losing team," he said. "But I think people are starting to feel good about college football around here again."

There are reasons to feel good, even though Syracuse lost its top offensive playmaker, receiver Taj Smith, to a broken collarbone in the Miami game. He might miss the rest of the season.

Patterson's play has improved dramatically since last season, when he made the difficult transition from option quarterback to drop-back passer in a West Coast offense. Working with his third offensive coordinator (Brian White) and quarterbacks coach (Phil Early) in three years, he has completed just 52.6 percent of his passes this season, but has thrown six touchdown passes and just one interception.

During the offseason, Patterson dropped some weight and worked on his three- and five-step drops with the same intensity Larry Bird used to work on his shooting.

"I'd take 100 drops a day, without a ball," said Patterson, who will be replaced by his highly touted freshman backup, Andrew Robinson, next year. "And everybody spent a lot more time in the film room with the coaches."

The running game is much improved with sophomore Curtis Brinkley and freshman Delone Carter splitting time, and the Orange are taking care of the ball. They have committed two turnovers. Only two teams in the country (Air Force and TCU) have committed fewer.

The defense has survived the losses of stars Anthony Smith, James Wyche and Ryan LaCasse, all of whom were drafted into the NFL. Though it ranks last in the Big East in total defense and rushing defense, Syracuse is first in turnover margin (plus-7) and sacks (19). It had only 25 sacks all of last season. Junior defensive end Jameel McClain leads the Big East in sacks (six) and tackles for loss (seven), and Smith is second in the conference in tackles (43).

No one, perhaps, is more emblematic of the team's apparent new commitment than junior safety Joe Fields. He was the backup quarterback last season, but was ready to bolt the program when he got pulled after one series against Louisville.

"I knew then something had to change," Fields said. "I wasn't going to say anything until after the season."

That was when the 6-foot-1, 215-pound Fields approached Robinson and requested a release so he could pursue a career as a quarterback at another school.

Robinson agreed to grant the release, but wouldn't let Fields go without a fight.

"I thought to myself, you know, here's a young man that I have great respect for, not just as an athlete, but as the type of person he is," Robinson said. "I thought, this is who we're looking for to recruit to Syracuse, and I hate the thought of just letting him go out the door without at least trying to compete to keep him."

Robinson convinced Fields that if he had an NFL future, it was as a safety. Fields decided to stay and has adjusted nicely to his new position. He recorded a sack on Miami's first play Saturday.

Fields swears by Robinson, whereas a lot of Syracuse fans were swearing at him last season. Hand-picked by the new athletic director, Dr. Daryl Gross, the relentlessly optimistic Robinson was under fan fire by the end of the year.

His players appreciated his constant enthusiasm.

"You wouldn't find any guy around here who'll say anything bad about him -- even the guys who left the program," Fields said. "The players feed off his energy."

Asked if the two-game winning streak represents the official turning point of the program, Fields speaks for every Orange follower when he says, "I hope so."