Bill Snyder has been thrown plenty of penalty flags in life, but each time, he's turned them into first-downs, if not touchdowns. He grew up in a single-parent family but lived according to his mother's expectations. He turned a nearly straight-F first-semester at the University of Missouri into solid B's the next three years at William Jewell College. He climbed the ladder from prep football coach to coach of the greatest turnaround in college football history at Kansas State University. 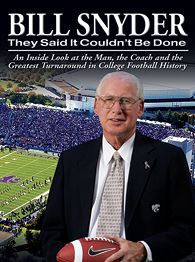 In each area of life, he refused to accept a no-can-do attitude. Instead, with each challenge, his sole mission was to find a solution to the next task. He conquered a series of personal life-altering moments and won; he took over Kansas State's football program and did the seemingly impossible in elevating it to elite status.

He's a man of 66 years but to this day he has a sincere appreciation for the movie Pinocchio. A pattern of life? Perhaps.

In Pinocchio, a woodcarving chap named Geppetto crafts a puppet, Pinocchio, out of a slab of wood, with passion, persistence and consistency. Snyder plays the role of Geppetto; the Kansas State University football program was his Pinocchio. From no more than a hunk of driftwood evolved a creation in Wildcatland that few believed possible.

Okay, let's be honest. It was an accomplishment no one believed possible.

Check it out if you like, but upon Snyder's arrival at Kansas State prior to the 1989 season, the Wildcat 93-year football record was a miserable 299-510-40. No program at the time -- none, nada, zippo -- had a poorer won-loss record in NCAA Division I history than Kansas State.

So why? Why would this 49-year-old highly successful offensive coordinator from the University of Iowa risk his football reputation by accepting the challenge in a location dubbed "Futility U." by "Sports Illustrated"?

Interrupting the question, Snyder, 17 seasons removed from first saying "I do" to the Kansas State University program, explained:

"I believed in the people. Yes, the program was down, but I guess I asked myself the question, 'Why couldn't Kansas State win? Why did the past have to dictate the future?' As far as having 500 losses and all the history that went with Kansas State football, I wasn't concerned with that."

How did Snyder achieve such greatness?

"If you're asking me to point to one thing, I would say perseverance," Snyder said. "In this profession, if a problem hasn't knocked on your door today, then hang on because it's coming. Especially in those early days, there were a lot of knocks on the door. There was just a bombardment of issues and concerns that we could not put a hold on. You had to have the perseverance to hang on."

When Snyder left the comfort of being an assistant at the University of Iowa under Hayden Fry for the unknown at Kansas State, he knew it would be a life-changing moment. Little did Kansas State University know that it too would undergo a change that would alter the status of football on campus forever.

Snyder was serving as a head coach for the first time. And while thinking the move up from coordinator to head coach would be no more than just another step, he quickly found otherwise.

"My first call back to Iowa was to say, 'Coach (Fry), I want to apologize. No one knows what it's like to sit in this chair until you've sat in this chair,''' Snyder said.

"There's no way anybody can tell you," Snyder said of preparing to be a head coach. "There's no reason why you should know, and no way you would know."

Snyder ruffled some feathers early on in Manhattan when he opted to remove the 1982 Independence Bowl trophy from the football complex lobby.

"There were mixed feelings about that," Snyder admitted. "It represented some tremendous effort on the part of a lot of people. It was representative of Jim Dickey and Kansas State's first bowl game, and I understood that.

"On the other side of the coin, it was a runner-up trophy in a two-man race," Snyder said. "If we were going to start from scratch, we needed to remove all those things that had a connotation of not being as good as we can be."

The ever positive Champions Tour golfer and KSU alumnus, Jim Colbert, had warned Snyder early in his stay at Kansas State that after his early success of five, seven, and five wins in 1990 through 1992, it might be wise to get out while the gettin' was good.

The former Wildcat golfer said, "We weren't close friends at that time, but I was just trying to be his friend and told him that he had already done the impossible and that the program would never get much better than it was at that time. I think all he did was smile, and say, 'okay.'"

The next year, Kansas State became a nine-game winner and advanced to the Copper Bowl in Tucson, Arizona.

As Colbert remembers, "I had just gotten back to the hotel lobby from playing golf and had my 'Jim Colbert' golf bag sitting in front of me. Now, I'm not sure if Snyder would have remembered me otherwise, but as the team's walking out to the buses, here comes Coach.

"He never broke stride, barely looking over at me. All he said was, 'And you said it couldn't be done.'"