The lights have been burning very late the last few nights at Texas A&M's football complex.

Preparing to play Texas Tech will do that to an opposing staff. The challenge of shackling coach Mike Leach's passing attack have kept A&M coaches up late at night watching mountains of grainy videotape, searching for any advantage.

"You see these eyes," A&M defensive coordinator Gary Darnell said, pointing at the noticeable bags under his peepers. "You see these black marks. I've watched them all." 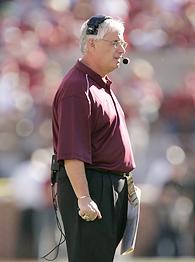 Saturday's game (ABC, 3:30 p.m. ET) at Kyle Field will represent the first true test for Darnell's 4-2-5 alignment. Out of football for a year after being fired as Western Michigan's head coach, Darnell jumped back into coaching for challenges like this.

His hiring was meant to pump some life into a struggling A&M defense that finished last nationally in pass defense last season. Their biggest skid might have been in a 56-17 loss in Lubbock last season, where Tech torched them for 627 total yards and 433 yards passing in the embarrassing blowout loss.

Former defensive coordinator Carl Torbush was the fall guy after those struggles. But even after a 4-0 start this season, coach Dennis Franchione's fortunes could similarly turn if the Aggies struggle again in the South Division like they did last season. A&M limped home with a disappointing 5-6 finish last season -- the third season in the last four in which it failed to make a bowl trip.

Franchione said he's not looking at Saturday's game as any more important than any other, even if the recent results in the rivalry might indicate otherwise.

"This is my next game and it's an important game because it's the first game of conference play, it's a Big 12 opponent and it's Texas Tech," Franchione said. "I spend no more time thinking about me in the equation. I spend all my time thinking about our team and players."

Players in Darnell's secondary appear to be the most experienced and talented of any of Franchione's teams.

Several A&M defensive backs got what Franchione termed a "trial by fire" last year. Arkeith Brown, Devin Gregg and Danny Gorrer all played as freshmen. Jordan Peterson redshirted as a freshman and Marquis
Carpenter is playing Division I-A football for the first time. All have seen extensive action so far this season.

"Experience has helped them," Franchione said. "That, and the multiplicity of things that Coach Darnell's defense has given them, has helped them gain confidence as we go into this stretch."