Nobody's ever accused Steve Spurrier of not saying what he feels.

But if he's average?

Well, the Ol' Head Ball Coach isn't above tugging on his visor and telling it like it is. 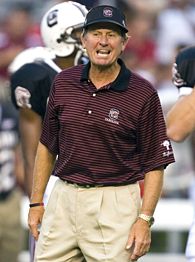 South Carolina isn't ready to compete for Southeastern Conference championships yet, and Spurrier will be the first to tell you. There's a chance Spurrier's second team might not make as big a splash in the conference as his first one did a year ago.

And as Spurrier himself would say, that's OK.

He's in it for the long run at South Carolina. One of the youngest 61-year-olds you'll ever find, Spurrier didn't come back to college football for a cameo appearance. He came back to make the Gamecocks a winner.

That takes time, takes multiple recruiting classes, takes facility upgrades, and most of all, takes patience.

So when Spurrier tells you that it's probably going to take a perfect game for South Carolina to knock off No. 2-ranked Auburn tonight at Williams-Brice Stadium, he's not impersonating his predecessor and pulling a Lou Holtz.

Nobody could make an opponent sound mightier than Holtz, who had a way of making Podunk U. sound like the 1978 Pittsburgh Steelers.

But in this case, Spurrier knows precisely what his club is up against and doesn't mind saying it.

"We're not really considering ourselves a title team right now," Spurrier said. "I don't know if another team in the SEC starts as many freshmen as we do and comes out and says, 'We're going to win the SEC.' I don't think it's a realistic goal, so we haven't talked about it.

"We would certainly love to win more than we lose in the SEC."

South Carolina was no match for Auburn a year ago. As Spurrier himself says, "We got clobbered."

The 48-7 beatdown was the second-worst of Spurrier's college career. Not that South Carolina fans need to be reminded, but the Gamecocks were forced to play Antonio Heffner, who is now at Tennessee State, at quarterback after Blake Mitchell injured his ankle the week before.

Heffner was sacked four times and fumbled once. The Gamecocks had a hard enough time getting enough men on the field. Moving the ball against Auburn's fast, aggressive defense would've been a dream world.

In a twisted sort of way, though, there was something about that humiliating loss that seemed to rejuvenate the Gamecocks. They recovered to win their next five games, including landmark wins over Tennessee and Florida.

Spurrier still uses adjectives such as "amazing" and "miraculous" when referring to that stretch. The Gamecocks played well above their heads during that five-game winning streak and came back to reality somewhat in their final two games, losing to Clemson, and then Missouri in the Independence Bowl.

Still, the message had been sent. Spurrier was serious about making the Gamecocks a factor in the Eastern Division.

Still fuming over the defensive meltdown in the Independence Bowl, Spurrier made Tyrone Nix the sole defensive coordinator after he shared those duties with John Thompson last season.

In this season's opener against Mississippi State, South Carolina had 10 new defensive starters on the field. 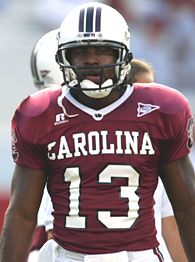 The biggest change has come at quarterback, where Syvelle Newton will start his third straight game against Auburn. Newton, one of the best all-around athletes on the team, was playing receiver a year ago when the Gamecocks were leveled on The Plains.

Newton took over for the ineffective Mitchell and has added some punch to a South Carolina offense that was shut out (18-0) in its last SEC outing against Georgia. He threw five touchdown passes in the 45-6 rout of Florida Atlantic Saturday -- all to Sidney Rice.

Nobody has ever questioned Newton's ability to scramble and make plays. But Spurrier was impressed with his improved presence in the pocket.

"I think Syvelle did much better dropping back and letting it go last week," Spurrier said. "He made some beautiful throws."

Newton is mobile enough to put pressure on any defense and will have to use his elusiveness to evade an Auburn pass rush that has accounted for 13 sacks this season. The Gamecocks (3-1, 1-1 SEC) are also starting two freshmen in the offensive line.

"We've got Syvelle going, and he gives us a chance," Spurrier said. "But obviously, if we can't block a lick, it's going to be a tough night."

The Tigers (4-0, 2-0) have won 19 of their last 20 games against conference foes. The one loss came in overtime last season at LSU.

The Gamecocks, on the other hand, haven't beaten a top-five team since 1981, when they won at No. 3 North Carolina. That's a span of 19 straight losses against top-five foes.

Then again, until last year, they'd lost 14 in a row to Florida and 12 in a row to Tennessee.