MIAMI -- A sideline-clearing brawl interrupted the third quarter of the Florida International-Miami game Saturday night, prompting the ejection of 13 players in the first meeting between the South Florida rivals. 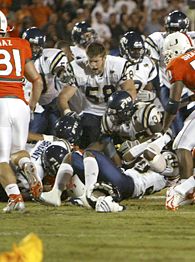 All 13 players are expected to be suspended for one game.

The fight started shortly after Jon Peattie's extra point with 9:00 left in the third quarter gave Miami a 14-0 lead. Both sidelines quickly emptied, with several fights breaking out during the melee before order was restored.

The brawl lasted about five minutes, and it took officials several more minutes to sort out the penalties. Players from both sides appeared to be swinging helmets, and one injured FIU player came onto the field swinging a crutch at Miami players.

More than two dozen uniformed police officers came onto the field, trying to end the fights.

Several minutes after order was restored on the field, one fight broke out among fans in the northwest corner of the end zone, with more than 12 police officers running into the stands to break up that melee. More officers, including some wearing helmets, continued to surround the perimeter of the field.

Tensions ran high throughout the evening, with several instances of players exchanging heated words at the end of plays.

But emotions quickly boiled over after Miami's second touchdown.

James Bryant caught a 5-yard touchdown pass from Kyle Wright, then drew a 15-yard flag for unsportsmanlike conduct. After that catch, he appeared to point at the FIU bench, then took a theatrical bow.