With all of the early buzz about bringing a pass-happy West Coast offense to Nebraska, Bill Callahan soon learned he couldn't stray too far from at least one aspect of the Cornhuskers' run-based roots.

It's why he's come up with a simple description for the Cornhuskers' recent running-game development. Callahan likes to call it "pounding the rock." 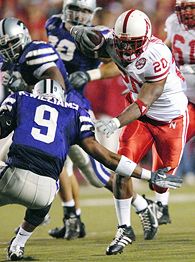 "You've got to establish some type of physical presence up front, and I think the running game is the best way to do that," Callahan said. "Whether you use one back or two backs, it really doesn't matter, as long as you allow the opportunity for your lineman to come off the ball and establish a physical nature. And a commitment to doing that is important to our team."

The Cornhuskers haven't gone back to the glory days of Mike Rozier and I.M. Hipp just yet. But passing is down more than 25 percent after Nebraska averaged 37 pass attempts per game last season with quarterback Zac Taylor.

Nebraska has utilized a four-pronged rushing attack that features four backs with at least 300 rushing yards this season. Nebraska has improved from ranking 107th in rushing last season to 11th this year with an average of 207.7 yards per game.

The new balance has helped the Cornhuskers become one of four teams nationally and the only Big 12 team to rank in the top 30 in rushing offense, passing offense, total offense and scoring offense. The big reason has been the development of a consistent running game.

That surge has helped Nebraska jump to a 6-1 record heading into Saturday's pivotal showdown of Big 12 divisional leaders against Texas.

"I don't know what they call that offense, if it's the West Coast or East Coast or South Coast or Canadian or whatever," Troy coach Larry Blakeney said after Nebraska thrashed his team 56-0 earlier this year. "Their style of play and their ability with Zac Taylor to throw the ball down the field really gave us more than we could handle."

Callahan's devotion to the passing game got him hired at Nebraska. But to really win back the hearts and minds of Nebraska's devoted fan base, he learned the
Cornhuskers needed to establish some kind of running game. It would provide balance for his passing game and hearken back to the program's blue-collar roots.

Nebraska's change has caught the attention of Texas coach Mack Brown as he prepares for Saturday's game.

"It's obvious that Bill Callahan came in and said, 'We're going to start running the ball like the old Nebraska teams, and we're going to stop the run,'" Brown said. "They've done that, and I think it's the No. 1 reason they're where they are now."

The Cornhuskers are off to their best start since 2001 and the biggest reason is a retooled running game. Callahan has developed a four-headed rotation of I-backs that have become a featured weapon, along with Taylor's aerial work.

Marlon Lucky, Cody Glenn, Brandon Jackson and Kenny Wilson have combined to rush for 1,487 yards. Each back has produced at least one 100-yard rushing game this season.

"I've told the guys that one of them would probably be mad after every game," Nebraska guard Greg Austin said. "They can all run the ball, but there's just not enough plays to go around. And in order to the get them into rhythm, they have to get their carries.

Callahan claimed earlier this week he was "oblivious" to which I-back was in the game. The decision on who plays typically is made by Nebraska running backs coach Randy Jordan, depending on game situations, Callahan said.

"We're just trying to get the best production we can out of the group," Callahan said. "We can get better and our group can play better. If it takes one back, two, three or four of them, we'll use them."

Jackson has emerged as the starter in the last two games, rushing for 208 yards on 38 carries in those games.

Lucky was the heralded recruit who was expected to claim the job before training camp. He started the first five games and has a team-high 476 rushing yards, including four TD runs of at least 34 yards.

Glenn has been compared to former Texas Heisman Trophy winner Earl Campbell because of his bruising running style. He has scored six TDs and gashed Iowa State for 148 yards when Callahan opted to run between the tackles against the Cyclones two weeks ago.

And Wilson, who joined the Cornhuskers as a heralded junior-college transfer from Butler County (Kan.) Community College, rushed for 100 yards with Glenn two weeks ago against Iowa State.

"They all put their personal goals on the shelf so we can win games," Nebraska offensive coordinator Jay Norvell told the Omaha World-Herald.

Collectively, the group has provided an I-back that fits almost every game situation the Cornhuskers they could face.

The running game's development has helped take some pressure off Taylor, who was sacked 38 times last year when depending heavily on passing.

In his first seven games this season, Taylor has passed for 1,547 yards, 14 touchdowns and two interceptions to qualify as the nation's ninth-most efficient passer. Most importantly, he's been sacked only 10 times.

"I really haven't taken many shots. It's not even close," Taylor said. "The hardest hit I took [against Kansas State] was one where I didn't run out of bounds on a bootleg run."

Nebraska's new-found rushing success will be tested against Texas' tough defensive front. The brute strength-vs.-strength matchup, coupled with Texas' running game against Nebraska's strong defensive front seven, means this game will be determined in the trenches.

"We always look forward to a physical game," Crowder said. "OU came right at us and we knew we had to be physical to win. We'll be looking forward to it."

Most of Nebraska's sculpting has been against softer defenses. The Cornhuskers haven't faced anything comparable to Texas' second-ranked rush defense, which is yielding only 47.7 rushing yards per game.

Glenn vows the Cornhuskers will steal a page from the Pittsburgh Steelers in their plans for the Longhorns.

"I think it will be very physical," Glenn said. "That's our team motto, that we want the game to be physical every week. The Steelers were hitting and pounding people every game last year. And that's how we want to play -- to be physical and show no mercy to anybody."

Nebraska's ability to dictate tempo in Saturday's game might end up determining it. Callahan is looking for a breakthrough win to signify his program is back among the national elite.

The Cornhuskers have soared as high as 17th in this week's AP poll. It's the highest ranking for a Callahan-coached team in his three-season tenure there.

The once-dominant Cornhuskers haven't claimed a Big 12 North Division title since 1999 and have played in only one BCS-affiliated bowl since the 2000 season. During that same period, the Cornhuskers have made three trips to the Alamo Bowl.

That's what makes Saturday's game so important: Callahan's team has a big chance to earn national respect while moving into the driver's seat for a North Division title.

"This is a great opportunity for the program," Glenn said. "With the way we are playing, we feel we are showing people we are on the way back. And if we could win against Texas, I think we would be."