PHILADELPHIA -- Temple coach Al Golden had no time to bask in his first victory. He had to share the feeling with someone else, but he owed a thank you he could barely get out. The first-year Owls coach broke down, hugging and clutching his assistant coaches, then quickly left to be with his wife, Kelly.

Golden had been carrying a burden this week, and it had nothing to do with Temple bringing the longest active losing streak in Division I-A football into Saturday's game against Bowling Green at Lincoln Financial Field.

Golden and his wife are expecting their second child, and she was hospitalized Wednesday night due to mild complications. Yet Golden, a cell phone constantly in his hand and a lack of sleep showing on his face, arrived at practice each morning. 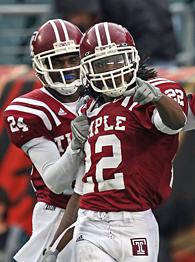 Golden's players rewarded their coach for his diligence, as Temple ended a 20-game losing streak with a 28-14 victory before 17,431. The nation's longest losing streak now gets handed off to Duke, which has lost 16 in a row after losing to Vanderbilt on Saturday.

It was a great relief to Golden, who for a few hours Saturday was able to take his mind off his more pressing personal matter.

"Thanks guys," Golden told his players, who welling up with emotion themselves. "Remember this feeling, remember the time and commitment you went through to get it, especially you seniors. You know what this week has been like for me and the personal situation I'm going through. You guys were great today. Remember this. I'd like to stay with you, but I have to rush to the "

Then Golden paused and caught himself, as his face cracked open with tears and his players converged around him in a group hug.

Perhaps the biggest thank you Golden had went out to sophomore receiver Travis Shelton, a budding star for the Owls (1-8). Shelton scored two touchdowns and picked up 222 all-purpose yards, including a 49-yard touchdown and a 96-yard kickoff return.

"This was for Coach Golden and the seniors on this team," Shelton said. "It feels great. We knew what Coach Golden was going through, yet he was there every day for us. We knew we had this in us. It was so great to look up at the scoreboard and see for once we weren't down 60-0, or 50-0. It does mean more coming against Bowling Green, especially with what they did against us the last two times we played them."

"We've been seeing improvement with this team each week," D'Onofrio said. "We had a chance to come in here and win, and the team and the staff knew it. This was a game we had to put our guts out on the line, especially with what Al is going through. The players knew it. We knew it. That's why it was emotional afterwards back in the locker room. Al is the face of Temple football. Right now, I'm happy for him."