It's perfectly logical to predict a touchdown festival when No. 3 West Virginia visits No. 5 Louisville on Thursday (ESPN, 7:30 p.m. ET). 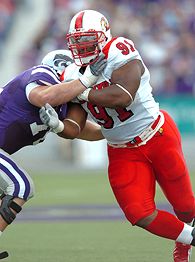 The two teams -- both 7-0 overall and 2-0 in the Big East -- have combined to average nearly 80 points and 1,000 yards per game. In their most recent meeting, on Oct. 15 last season, they nearly killed the scoreboard operator, ringing up 90 points and 849 yards in WVU's 46-44 triple-overtime victory.

You have a couple of college football's most respected offensive minds in WVU coach Rich Rodriguez and Louisville coach Bobby Petrino, a couple of nationally recognized quarterbacks, a Heisman Trophy-caliber running back and a slew of game-breaking wide receivers -- so clearly you have a shootout on your hands.

Perhaps, but it's not a guarantee -- not when both team's defenses are ranked nearly as high as the offenses.

"I've been in [games] where you have two great offenses going against each other, and it ends up being a defensive ball game," Petrino said.

Petrino pointed to last year's meeting, which didn't get crazy until the overtimes began. Louisville led 24-7 midway through the fourth quarter. It was 24-24 at the end of regulation.

"It was more of a ball-control, low-scoring game than I anticipated," Petrino said.

It's impossible to predict the tenor of Thursday's game, which is the first contest pitting two top-five teams from the Big East since Nov. 4, 2000, when No. 3 Miami beat No. 2 Virginia Tech 41-21.

One of the big mysteries: Which defense, if either, is for real?

Nobody can say for sure, because the opposition has been so inferior.

Strike that. The opposition has been far worse than inferior. These two teams have, in fact, spent the better part of two months feasting on a Who's Who of College Football's Most Hideous Offenses.

Here's a list of the opponents and their national rank in total offense (keep in mind that 119 teams play Division I-A football):

That might help to explain why both defenses are ranked so highly.

"Louisville plays maybe more of an aggressive style," Robinson said. "WVU is more unorthodox. They both have things they put at you."

Ultimately, the game could come down to how well West Virginia's 3-3-5 alignment deals with Louisville's lethal passing game, compared to how well Louisville's 4-3 defense contends with WVU's nation-leading ground attack.

UConn coach Randy Edsall believes WVU is vulnerable to the pass. The Mountaineers have the fewest sacks in the Big East (14) and returned only one starter in their secondary this season in strong safety Eric Wicks. WVU is only 43rd in the country in pass defense (182 yards per game), though a lot of those yards were accumulated when other teams got desperate.

"They do a great job, but there are some things there you have to take advantage of," Edsall said. "If you can protect and if you can throw the football, then I think you have a chance to move the ball and score some points on West Virginia. That's what I see.

"It'll be interesting to see, because I think one of Louisville's strengths is their quarterback and their receivers."

Edsall's problem was that he didn't have a good enough quarterback to test his theory in a 37-11 loss to WVU. Louisville has no such problem, with junior Brian Brohm at the controls, though Brohm has not played as well this season as he did last season. He has only four touchdown passes, plus three interceptions, in 4½ games.

Brohm has played two games since returning from thumb surgery and admitted this week that he wasn't 100 percent. But he says the time off (11 days between games) has restored the zip to his passes.

Wicks likes the fact that Brohm is not especially mobile.

"We'll try to pressure him as much as possible," said Wicks, who made the game-clinching play last year when he stuffed Brohm's scramble on a two-point conversion attempt. "If we can get him to throw some bad balls, we'll be OK."

The Mountaineers' bend-but-don't-break defense is designed to minimize big plays. Brohm was asked to compare their style to Miami's. The Cardinals whipped Miami 31-7 on Sept. 16.

"They run totally different defenses," Brohm said. "Miami will challenge you one-on-one with your receivers. This defense kind of lays back, won't attack you as much, doesn't give up the big play at all."

No doubt, this could be the game when Louisville misses injured tailback Michael Bush the most. He killed the Mountaineers last season.

"Being without Bush is big, but they've kind of picked up without him," McLee said.

Brohm figures running backs Kolby Smith and George Stripling will be among the targets he'll use in a short passing game.

"We're going to have to use some of our passes as a running game," Brohm said. "They have a three-man front, so I think throwing the ball will be a good choice."

Rodriguez ripped his WVU defense earlier this season but seems satisfied with its recent performances. He has been waiting for a leader to emerge and is looking for more consistency, particularly on third downs.

"I think we're getting to the point where we have almost as much confidence as we had in 'em last year," Rodriguez said. "Maybe not quite yet, because of the [limited] experience, but they're getting close."

On the other side of the ball, Louisville has the monumental challenge of trying to contain the best running attack in the country. Last year's game proved to be the coming-out party for WVU quarterback Pat White and tailback Steve Slaton. White replaced an injured Adam Bednarik in the second half and sparked the comeback with clutch runs and passes. Slaton rushed for 181 yards and five touchdowns.

As the miracle comeback progressed, Louisville's defense regressed. By overtime, it was useless.

"It seemed like nobody on their defense took charge," WVU center Dan Mozes said after the game.

White and Slaton have been running wild ever since. Slaton is a legitimate Heisman Trophy candidate. He's fourth in the country in rushing at 151.29 yards per game and averages a ridiculous 7.01 yards per carry. White already is second all-time in rushing yards among Big East quarterbacks, having surpassed Donovan McNabb last week.

Cardinals defensive tackle Amobi Okoye is convinced his team will provide an answer for the Mountaineers' spread option. Having 42,000 screaming fans behind him won't hurt.

"Every time we play at Papa John's Cardinal Stadium, we pretty much put on a show," Okoye said.

Most of the time, that's true. The Cardinals have won 15 consecutive home games, the second-longest streak in the country. But in their most recent home game, Oct. 14 against Cincinnati, they surrendered 212 yards rushing in a way-too-close-for-comfort 23-17 victory.

"It's going to be hard to stop them, no question," Petrino said. "They do an excellent job up front. They're as well-coached as any team you'll see. We've got to try to control it, get 'em in some down-and-distance situations and not let them be so successful on first down."

In other words, make White pass. He is second in the Big East in passing efficiency (153.6), but it's safe to say Petrino would rather see White cocking his arm than moving his feet.

"We really underestimated how fast he was [last year]," Okoye said, "and we had to pay the price for that. He's a pretty good quarterback."

White will see his receivers -- he has a variety of explosive, if underused weapons -- in plenty of one-on-one situations. The Cardinals like to blitz and boast some excellent playmakers in the likes of safety Brandon Sharp and cornerback William Gay (three interceptions).

Louisville did, however, surrender 303 yards passing to Syracuse's Perry Patterson the last time out.

Okoye, a 19-year-old senior, is a one-man wrecking crew. He leads the Cardinals with 10 tackles for loss. Petrino believes his defense is better than last year's because of its depth and experience. Eight upperclassmen start.

The Louisville players have been waiting for this game the way a school kid waits for recess.

"It's definitely been in the back of our minds all year," Okoye said. "It was hard not looking forward to this game."

Finally, it's here. Finally, each team has a dangerous offense to contend with.

The defenses can no longer rest.