Dennis Franchione's job was on the line before this season. That's why the Texas A&M coach was so relieved when he heard team leaders speak at a leadership council meeting before spring practice about what they hoped to accomplish.

Such talk might have been considered a tad presumptuous considering the Aggies' struggling 5-6 record last season. But the players were intent on their goals and didn't hesitate to describe how they would achieve them. 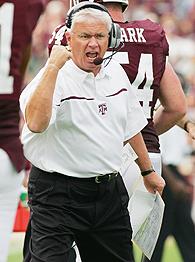 "I had a few issues I wanted to talk about, and then the players took over," Franchione said. "They talked about having a team attitude and developing a spirit of oneness. I just sat back, listened, felt good and enjoyed it. I told [my wife] Kim after the meeting it was the best leadership meeting I had been to in a long time."

That team attitude has helped spark the Aggies to an 8-1 record (4-1 Big 12) heading into Saturday's game against Oklahoma. It's A&M's best start since its 1998 Big 12 championship season.

The Aggies haven't done it with a lot of star power and most observers would be hard-pressed to name more than a couple of players who might merit all-conference mention.

But they've done the little things to put them in position to claim the South Division championship if they can finish their brutal closing run of games against Oklahoma, Nebraska and Texas.

Quarterback Stephen McGee said the members of the leadership council had definite ideas that a turnaround was necessary after last season's disappointing finish. A&M started 5-2 last season before dropping its final four games.

"We realized it was our job as players to get things worked out," said McGee, a sophomore who was elected to the council despite starting only one game before this season. "Our leadership council took the lead and made it apparent that we had to make some changes to get where we wanted to be."

"This game is huge and it's why I came to A&M to be in this position. We're on a national stage against a nationally-ranked team. We're trying to get A&M back where it's always been to -- as a powerful football team."
-- Texas A&M tight end Martellus Bennett

That unity has helped this team, which has trailed at some point in seven straight games this season.

"Confidence is high and belief is high," Franchione said. "The last few weeks my biggest coaching line to them at halftime is just keep playing. Something good was going to happen and they believe that."

A&M hasn't looked pretty always, but it still has South Division title hopes clearly in front of them if they can win out.

Franchione was presumed to still be on the griddle early this season after less-than-impressive victories against Army and Kansas and a loss to Texas Tech in the Aggies' conference opener.

The players never lost confidence that Franchione could help them turn the program around, even after the struggles of last year.

"We all believe in him," McGee said. "People outside the program don't understand it's wasn't his fault. We were struggling because we weren't doing our jobs.

"We weren't playing as strong as a team as we needed to be and you can't win in the Big 12 when you play like that. But that's not the coach's fault. It's something we needed to fix ourselves."

A&M's option-based running attack has been its most consistent offensive weapon. The emergence of hulking 274-pounder Jorvorskie Lane and freshman Michael Goodson has helped overcome Courtney Lewis' struggles with injuries. 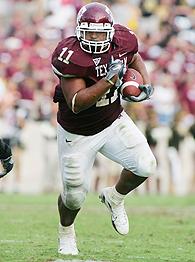 Playmaking tight end Martellus Bennett and Goodson paved the way for A&M's 31-21 victory at Baylor last week, fulfilling excitement that Franchione had when he attracted them as recruits. Both were the kind of highly regarded recruits that A&M seemed to be missing in recent years.

Bennett snagged five receptions for 133 yards, including a 75-yard touchdown grab that was A&M's longest offensive play of the season. And Goodson added 96 yards rushing, including a serpentine 64-yard TD run that clinched the game and left Baylor players dumfounded.

"You've just got to say the guy made a play," Baylor cornerback C.J. Wilson told the Waco Tribune-Herald. "He had stopped just a couple of feet in front of me, and then, it looked like he ran to the restroom."

Improvement developed by new defensive coordinator Gary Darnell in his 4-2-5 alignment. That group has helped the Aggies bounce back after yielding an average of 305 yards per game passing last season, worst in the nation.

"I don't know if there's one thing to pin it on other than the fact that our coaches have put the players in position to play with confidence," Franchione said. "We've been at our best when we've been good in our first-down defense. That's when we don't get behind on the chains."

That's been the case both offensively and defensively. A&M is the best third-down team in the Big 12 and No. 6 in the country, converting 52.5 percent of its third downs. The Aggies' defense also is No. 6 nationally, holding opponents to a 28.1 percent conversion rate on third down. Only LSU is in the top 10 in both statistical categories this season.

The Aggies also have been proficient at knocking opposing quarterbacks out of the game. Their last two victories against Oklahoma State and Baylor likely turned when Reid (concussion) and Shawn Bell (knee injury) were taken out on clean plays. 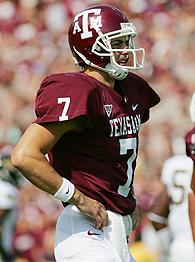 But the biggest transformation has been with McGee at quarterback. While his statistics might not match those of quarterbacks like Chase Daniel, Bobby Reid or Colt McCoy, he has evolved into a hard-nosed option quarterback who doesn't make many mistakes and is a strong leader.

Some of the seeds for that development likely came in last season's loss to Oklahoma at Norman. McGee had taken over for an injured Reggie McNeal with the Aggies trailing by 13 points and the offense floundering.

On one of his first plays, he sprinted in front of the A&M sideline where he was popped by Oklahoma cornerback C.J. Wolfe. McGee was driven 10 feet on the hit, but popped up and got into Wolfe's face about who got the best of the hit.

That moxie immediately energized his teammates and has carried on to this day, Franchione said.

"Right there, things changed," Franchione said. "That's just the beginning of the spirit this team has played with. We didn't win the Texas game, but we played very well and played very hard. Something there took us into the offseason. Then something took us into spring practice. That little spirit has taken us through October."

November will make or break the Aggies. Franchione is 2-8 in November since coming to Texas A&M. His combined record against Nebraska, Oklahoma and Texas is 0-7.

But Franchione thinks this year's team is better equipped to handle the pressures of the tough finish.

"I think their biggest attribute is their spirit and attitude, their confidence," he said. "This team is together and mentally tougher and believes in each other and themselves."

Saturday's game will be the biggest in November at Kyle Field since Oklahoma brought undefeated teams there in 2000 and 2002. The Aggies have made the Sooners sweat in the past, nearly winning against their 2000 national championship team and upsetting the then-No. 1 ranked Sooners two seasons later.

"This game is huge and it's why I came to A&M to be in this position," Bennett said. "We're on a national stage against a nationally-ranked team. We're trying to get A&M back where it's always been to -- as a powerful football team."