STATE COLLEGE, Pa. -- Joe Paterno wants to coach this
weekend, but don't look for him to pace the sidelines in his blue
Penn State jacket and rolled-up khakis. 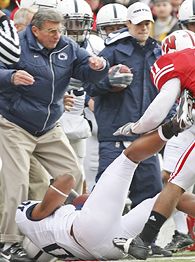 The feisty 79-year-old coach was listed in good condition Monday
at Mount Nittany Medical Center following an 80-minute operation a
day earlier on his fractured shin bone and two torn knee ligaments.
The injuries stemmed from a sideline collision during last week's
loss to Wisconsin.

He was expected to remain in the hospital through Tuesday,
assistant athletic director Jeff Nelson said.

Paterno plans to coach Saturday against Temple, though it's
unclear if that means from the Beaver Stadium sidelines or a
coach's box.

"He woke up today and asked for the second phase of the game
plan and scouting reports on Temple," school spokesman Guido
D'Elia said. "He's been on the phone all day. He's still in
charge."

Team doctor Wayne Sebastianelli anticipates a full recovery
after several screws were inserted into the injured leg, which was
also fitted with a temporary brace. Paterno might be able to put
weight back on the leg in about six weeks.

Just in time for a New Year's Day bowl game, which the Nittany
Lions would likely wrap up if they can win their last two games of
the season.

The injuries didn't keep Paterno from catching up on work.
Paterno's son and quarterbacks coach, Jay, said his father was
already reviewing scouting reports and game plans from his hospital
bed Monday.

The school canceled Paterno's regular Tuesday news conference at
Beaver Stadium. Another news conference was scheduled for Wednesday
with Sebastianelli. It was unclear if Paterno would be available.

Saturday, however, appears a done deal. The school said there
was a "mobility plan" to make Paterno available for team
activities on and off the field, though the exact details haven't
been determined.

One football staffer had mentioned a golf cart as a possibility
to get around on the sidelines. D'Elia talked about a
"super-cart" or "souped-up scooter" as a possible long-term
transportation device.

Or might Paterno, who stubbornly tried to shoo away help
initially after he was injured, try walking on crutches?

Such are the questions buzzing around the football team now at
Penn State, where even the left leg on the statue in his honor
outside Beaver Stadium has been wrapped with a bandage.

Paterno is in his 41st year as Penn State head coach and under
contract through the end of 2008. Only Amos Alonzo Stagg coached as
long with one school, leading the University of Chicago from 1892
to 1932.

Paterno's 360 career wins are second among major college coaches
to the 364 of Florida State's Bobby Bowden.

The injury overshadows the Happy Valley homecoming of Temple
coach Al Golden, one of four Penn State alums on the Owl football
staff. Golden played tight end at Penn State from 1987-91 and was
linebackers coach and recruiting coordinator under Paterno in 2000.

"I told some of my players the other day, 'This guy is 80 years
old.' He didn't want to leave the field," Golden said Monday.
"That's tough, now. We need some of those players on our team."