It's been billed as a once-in-a-lifetime, never-before-seen epic, a classic of classics, and who's to say it won't be?

Then again, who's to say it will be?

Sure, Ohio State and Michigan top both the college football polls and the Bowl Championship Series standings, so they certainly seem the class of the sport this close to the conclusion of the regular season. 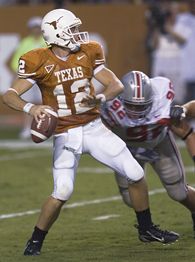 But does all that labeling really meet truth-in-advertising standards, or is reality somewhere short of the Buckeyes and Wolverines being so superior that a rematch Jan. 8 in the BCS title game seems justified before they even bother to meet for the first time in Columbus on Nov. 18?

We won't know for another week, of course, but what's certain now are indisputable cracks in the reputations of both Big Ten powers as they prepare for the final tests before their first-ever No. 1 vs. No. 2 meeting and their first clash with mutually unblemished records since 1973.

Both 10-0 overall and 6-0 in the Big Ten, OSU and Michigan face road tests Saturday -- the Buckeyes at Northwestern, Michigan at Indiana -- that now seem less of a formality than was the case before their respective struggles this past weekend.

The Wolverines' 34-26 home victory over Ball State withstood a Cardinals' advance to the 2-yard line in the final minutes, while OSU let all but a touchdown of a 17-0 halftime lead evaporate in a scoreless and listless second half at Illinois.

What to make of it all?

Were those signs of genuine weakness arising in time to spare us anointing the wrong kings of the college game, or mere blips for two titans looking past overmatched opponents because they can't wait to get at each other?

Let's go to the videotape and see.

The Buckeyes' and Wolverines' résumés draw equally from a huge nonconference road win and domination of the Big Ten ever since.

Not to be outdone, Michigan humbled Notre Dame at South Bend 47-21 the following week.

In the minds of the pollsters, such victories are -- as the Judd Hirsch look-alike might say -- "Rewarding. Very, very, very rewarding."

Neither Texas nor Notre Dame has lost since, so it's hard to argue with the quality of those wins.

But let's do it, anyway.

Texas wasn't the team in early September that it is now, mainly because coach Mack Brown and offensive coordinator Greg Davis hadn't yet located the key to the shackles that bound quarterback Colt McCoy when the Buckeyes visited.

On a night when the Longhorns averaged 5.5 yards per carry, Brown and Davis never saw fit to let McCoy play-action and go deep. Instead, McCoy was allowed only to dink and dunk against an OSU defense with nine new starters and an all-new back seven.

McCoy has since thrown for a Texas single-season record 27 touchdowns. Maybe someday soon, Brown and Davis will stop kicking themselves over their ridiculously conservative game plan that likely cost the Longhorns a chance to defend their title. 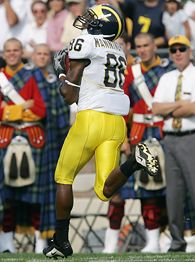 As for Michigan, its dominance of Notre Dame featured three Brady Quinn interceptions. None was bigger than the first pick, which went off the hands of a Notre Dame receiver directly to linebacker Prescott Burgess for a 31-yard score.

Before you could blink again, it was 34-7, with Mario Manningham catching three touchdown passes and Michigan scoring another TD thanks to an Irish fumbled kickoff return and two penalties inside the 10-yard line.

So, hats off to Michigan, but Notre Dame hasn't been that sloppy since, and Manningham isn't certain to regain the form this season that made him a star that day. Torn cartilage in his knee sidelined him for three games before a return to the lineup Saturday for a token appearance against Ball State.

Since Manningham's injury, quarterback Chad Henne has thrown just three TD passes in four games and has thrown for 200 yards just once (vs. Iowa).

So, without Super Mario, Michigan isn't scoring 47 points like it did in four charmed quarters against Notre Dame.

Of course, the Buckeyes and Wolverines both have lights-out defenses, with OSU ranking first nationally in fewest points allowed (7.6 per-game) and Michigan seventh (13.0).

The Wolverines are the best in the country at stopping the run (30.3 ypg). The Buckeyes aren't as flashy, but at No. 18 nationally (92.4 ypg), they don't require a cut man to repair many gashes.

Most of these numbers have been recorded against the incorrectly named Big Ten (which, of course, has 11 teams).

Sure, Ohio State, Michigan and Wisconsin are legit. But the leftovers are so bad that the Big Ten is almost certain to stiff not just one but two of its six bowl partners for lack of enough bowl-eligible teams.

Hold on, there, Penn State fans. Before you light those torches and grab those pitchforks, let's remember you've lost to the only ranked teams (OSU, Michigan, Wisconsin and Notre Dame) on your schedule.

Yes, Iowa, you're special, but only because you've lost to two conference members (Northwestern and Indiana) who in turn have lost to Division I-AA opponents.

Indiana? Please, do not puff your chest out over being 5-5 when you've lost to a Division I-AA team at home, trailed by 52 points at home against Wisconsin and got rolled by Minnesota 63-26 this past week.

None of this means Ohio State and Michigan aren't the juggernauts they're reputed to be.

The Buckeyes appear unbeatable when quarterback Troy Smith is rifling completions to receivers Ted Ginn Jr. and Anthony Gonzalez and when running back Antonio Pittman is stiff-arming defenses who stray from the box to defend the pass.

And Michigan looks lethal when Michael Hart pounds away inside the tackles and Henne occasionally pulls the ball out and throws over the top to Manningham, Adrian Arrington or Steve Breaston.

So come Nov. 18, it just might be the perfect storm, a college football confluence of colossal cosmic destructive awesomeness.

Bruce Hooley covered the Big Ten for 19 years and now is host of a daily talk show on WBNS-AM 1460 in Columbus, Ohio.