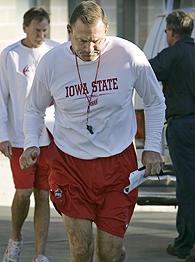 McCarney, the Big 12's longest tenured coach, will remain with
the Cyclones for the final two games of the season.

"Sometimes you have to put the organization ahead of yourself.
I think the best thing for this program right now is for me to step
down," McCarney said.

Iowa State is 3-7 this season, 0-6 in the Big 12, and has lost
its last seven games against Division I-A opponents by an average of 20 points.

According to athletic director Jamie Pollard, the Cyclones'
recent tailspin left McCarney with little choice but to resign.

"It became apparent to us over the past several weeks that the
momentum had been lost. And there wasn't much that he or I could do
to get that momentum back," Pollard said.

"Iowa State's football program has to be healthy for us to have any chance to compete in the Big 12. If football isn't healthy, we get stuck."
-- Jamie Pollard, Iowa State AD

"This one's different. This one hurts," Pollard said.

Pollard has embarked on a $135 million fundraiser to renovate
antiquated Hilton Coliseum and Jack Trice Stadium. He acknowledged
that the football team's recent struggles have made it tougher to
raise money for that project, which was approved by the school's
Board of Regents in June.

"To be able to do what we want to do, we have to be healthy in
football," Pollard said.

He said accepting McCarney's resignation was the toughest
decision of his career, and it showed. Pollard seemed more
emotional than McCarney during Wednesday night's news conference.

"I clearly didn't get into the profession for moments like
this. Nobody wanted Dan McCarney to be more successful than me,"
Pollard said. "If I had one wish right now, it would be that this
isn't happening. But that's not an option."

McCarney is 55-84 at Iowa State, including a 26-67 mark in the
Big 12, but he also guided the program through one of its most
successful periods. Iowa State, which hasn't won an outright
conference title since 1912, came within one win of reaching its
first Big 12 title game in each of the last two seasons, only to
lose the season finale.

McCarney has led the Cyclones to bowl games in five of the past
seven years. Iowa State had gone 22 years without a postseason
appearance.

Speculation about McCarney's future had been heating up over the
past month. The Cyclones were expected to compete in the Big 12
North after returning 10 starters on offense from last year's 7-5
team, but they struggled in recent weeks.

Pollard likened the media frenzy surrounding McCarney's job
status over the last two weeks to a "circus," and McCarney said
Monday it had become a huge distraction for his players.

"We've had somewhat of a divided Iowa State community, and at
the bottom of that is that we've really struggled. I'm sorry for
that. That's a shame," McCarney said. "I want the best for this
place because I love Iowa State."

McCarney has always been popular with his players, and many
current Cyclones were upset with the move.

"I know he could have turned it around if given the
opportunity," junior wide receiver Todd Blythe said. "It's tough
to see him go out like this because I know what kind of guy he
is."

Pollard said a national search for McCarney's replacement will
begin immediately. He did not set a timetable for finding a new
coach.

"Iowa State's football program has to be healthy for us to have
any chance to compete in the Big 12," Pollard said. "If football
isn't healthy, we get stuck."

Pollard will honor McCarney's contract, which states that he
will receive $225,000 a year -- the amount equal to his base salary
-- until its completion on June 30, 2010.

McCarney took over at Iowa State in 1995 after five seasons as
the defensive coordinator and defensive line coach under Barry
Alvarez at Wisconsin. He spent the first 13 years of his coaching
career as an assistant at Iowa.

McCarney will be remembered for putting Iowa State football on
the map. He won six of the last nine meetings with in-state rivals
Iowa and brought respect to what used to be one of the nation's
worst programs in a major conference.

But this season, he failed to live up to expectations that
didn't exist before his arrival.

"I've got peace with my decision. I have no regrets. It's time
for me to move on," McCarney said. "It's been a hell of a ride."