It's that time of year again in the Bluegrass. 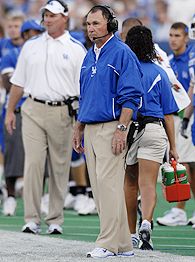 The weather is turning nippy. The holiday season is just around the corner, and from Owensboro to Middlesboro, there are thoughts of basketballs bouncing through people's heads.

But the best story going in Kentucky right now is a football team that's streaking toward a bowl game for the first time since 1999 and its NFL-hardened head coach, who's doggedly stayed the course despite answering more questions about his job status the last two years than he has about his team.

Rich Brooks, who's handled the Wildcats' success this season with much the same humility as he did the criticism in the previous three years, did the unthinkable at the SEC's football media days back in July.

Unsolicited, the 65-year-old coaching veteran brought up the subject of his shaky job security.

He opened his question and answer session with reporters by deadpanning that he was happy to be there again.

"There was some question last year whether I would be. I'm hoping that I'll be back here next year," said Brooks, who won a total of four Southeastern Conference games during his first three seasons in Lexington.

The Wildcats (5-4, 3-3) can match that total this season if they can take care of Vanderbilt (4-6) on Saturday in Commonwealth Stadium, which would make them bowl eligible. They also have games remaining against Louisiana-Monroe at home and Tennessee on the road.

This is a team that can almost taste the postseason.

But don't tell the refreshingly candid Brooks that the Wildcats have completely turned the corner. Not yet, anyway.

He's the first to say that would be premature.

"We're in a position that Kentucky hasn't been in for a while," said Brooks, who spent two years as the Rams' head coach and four years as the Falcons' defensive coordinator before getting back into the college game. "We can handle it one of two ways. We can get full of ourselves, or we can understand what we had to do to get here."

The 24-20 win over Georgia last week was big on a couple of different fronts.

Perhaps most important, it was a signature victory, the kind the Wildcats hadn't won under Brooks. They were 0-10 against Eastern Division heavyweights Florida, Georgia and Tennessee during Brooks' watch prior to taking down the Bulldogs, and ultimately, the goal post in the east end zone at Commonwealth Stadium.

The way the Wildcats won the game was equally significant.

Twice in the fourth quarter, they drove the length of the field for touchdowns when they were trailing. And after Tony Dixon capped that final drive with a 3-yard touchdown run to put Kentucky ahead with 1:21 to play, you could almost hear the collective, blue-clad sigh in the stadium.

Could the defense -- the same defense ranked 116th nationally out of 119 Division I-A teams -- really hold the lead?

Sure enough, Georgia needed just two plays to get to midfield. But somebody forgot to tell redshirt freshman cornerback Trevard Lindley that Kentucky has made a living of snatching defeat from the jaws of victory.

He stepped in front of a Matthew Stafford pass for what was surely the most important interception of the Brooks era at Kentucky.

Now comes the obvious question: How will the Wildcats deal with success?

"The only time I've ever been disappointed in this group was the LSU game," said Brooks, whose club was destroyed 49-0 by the Tigers on Oct. 14. "This is a very focused group, and they are very willing to lay it out there and work hard. They are going to get the message that last week was last week, and they could wash away a lot of the good things if they don't follow through this week.

"The one great thing about last week is that we had to come from behind in the fourth quarter, and we've not done that all year."

Brooks said prior to the season that the Wildcats had more speed, more depth and more playmakers than at any other time since he put away his fishing rod in 2003 to come out of retirement and take a stab at the second toughest coaching job in the SEC.

The guy on the other sideline this weekend, Vanderbilt's Bobby Johnson, has the toughest job.

The growing pains on defense have been obvious for the Wildcats, and progress has come at a snail's pace. But Brooks stuck by his belief that the young talent in the program would rise to the forefront.

The only question was whether Kentucky would win enough games this season for him to be around to coach those players as upperclassmen.

The Wildcats played 13 true freshmen this season, the fifth highest total in the nation. They played 14 last season.

Offensively, just about all the key contributors will be back for the 2007 season. The Wildcats are especially deep at running back. And Keenan Burton, despite injuries, might be the most underrated receiver in the league.

Junior quarterback Andre Woodson, who wasn't even assured of the starting job back in the summer, has mirrored the Wildcats' turnaround this season. He's running a neck-and-neck duel with Tennessee's Erik Ainge as the SEC's Comeback Player of the Year and leads the conference with 20 touchdown passes.

For a change, there is a future at Kentucky -- and it's not on the hardwood.