TALLAHASSEE, Fla. -- For months, Florida State fans have
clamored for the ouster of offensive coordinator Jeff Bowden,
blaming him for the team's woes. 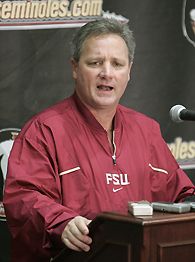 Tuesday, Bowden ended the debate, resigning just three days
after the Seminoles were shut out for the first time in 233 games.

His resignation will take effect at season's end, said athletic
director David Hart Jr. said. Then, Bowden, the youngest son of
Seminoles head coach Bobby Bowden, will be reassigned outside the
athletic department until his contract expires in August 2007.

"I believe in my heart that for Bobby Bowden this is the
decision that I need to make," Jeff Bowden said. "I could not be
happier that I had this opportunity. But it's just time for me to
move on."

The leading candidate to replace Bowden is Valdosta State coach Chris Hatcher, a source close to Bobby Bowden told ESPN's Joe Schad. Hatcher is close to the head coach and would be available to coach as soon as a bowl game.

Hatcher, considered an offensive guru, led Valdosta to a Division II national championship in 2004. Valdosta did not make the playoffs this season for the first time since 1999.

According to the source, Bobby Bowden tried to talk his son out of resigning. But after a 30-0 loss to Wake Forest, Jeff felt there was nothing left to try and wanted to end speculation and take pressure off his father.

Hart said Bowden, 46, came to him Monday, and an agreement was
worked out. Details are pending, Hart said, and will be released
Wednesday.

"Jeff thought he wanted to give his father, give the staff and
give recruiting the best possible opportunity to unfold in a
positive manner," said Hart, adding all assistant coaches would be
thoroughly evaluated after the season.

Florida State's players learned about the resignation as they
hit the practice field Tuesday.

The Seminoles won national championships in 1993 and 1999 but
have struggled since the younger Bowden replaced now-Georgia head
coach Mark Richt as the offensive coordinator in 2001.

This season marked a new low point. Florida State must win one
of its last two games -- against Western Michigan on Saturday or
Florida on Nov. 25 -- to become bowl eligible.

The Seminoles (5-5, 3-5 Atlantic Coast Conference) lost at home
30-0 Saturday to Wake Forest. It was the first time Florida State
had been shut out in Tallahassee in Bobby Bowden's 31 seasons as
coach.

Bobby Bowden has stood by his son's performance as offensive
coordinator, despite a notable decline in scoring and yardage
gained in the past half-dozen seasons.

"I am disappointed in Jeff's decision," the elder Bowden said
in a university release. "This is a big loss to me personally. His
decision is an emotional one for me."

The family matriarch, Ann Bowden, was home in bed with the flu
and unavailable to comment.

In Richt's final season, the Seminoles averaged 42.4 points and
549 yards a game on their way to a national title game against
Oklahoma -- totals never approached during Jeff Bowden's six years
as coordinator.

In the last three seasons, Florida State has averaged fewer than
30 points a game -- for the first time since the 1981 season.

Jeff Bowden, who also coached wide receivers, also was plagued
with an inconsistent quarterback during much of his tenure --
starting six different players at the position in six seasons. The
position is up for grabs again this year with Drew Weatherford and Xavier Lee struggling.

"The decision he made today was not one that he wanted to
make," said Keith Jones, who played for the elder Bowden in the
late 1970s and now serves as a color analyst on Seminoles
telecasts. "To his credit, it was one he made for the benefit of
the program."

Fans have been reluctant to criticize the elder Bowden -- major
college football's wins leader with 364 victories -- focusing
instead on his son. A Web site calling for Jeff Bowden's removal
had gathered 2,975 signatures as of Tuesday.

Florida State president T.K. Wetherell, who has received
hundreds of e-mails urging that the younger Bowden be fired, had no
comment on the resignation.