MIAMI -- Many wore the school colors of orange, white and
green. Others filed into church wearing T-shirts with Bryan Pata's
name and the words "In loving memory." Some solemnly started at
the framed jersey hoisted over his casket. 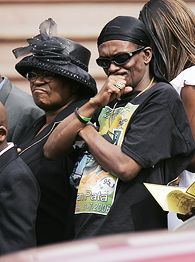 About 1,000 people packed the funeral of the Miami defensive
lineman Tuesday, a week after he was shot and killed outside his
apartment complex.

"I never got to tell him," said Miami defensive lineman Dwayne
Hendricks, who was also Pata's roommate. "But as a teammate, a
brother and a role model, I love you, man. I'll miss you, dog."

Pata, a 22-year-old senior, was shot Nov. 7 outside the
off-campus apartment complex where he lived. His death rocked the
community and a team already facing adversity, including a wild
on-field brawl, a string of losses and rumors that Coker's job is
in jeopardy. No arrests have been made.

Two lines of more than 100 players and students walked past
photo montages of Pata and a dozen floral arrangements. Some wore
buttons with Pata's picture, one carried a jersey with his name.
They said nothing, their heads hung low, eyes guarded by
sunglasses. A few hugged and family members cried openly while a
woman sang "Amazing Grace."

Edwin Pierre-Pata said his brother, the youngest of nine, was
always the "special" one who played football more for his family
than himself.

"He worked so hard to get to where he was at," said
Pierre-Pata, a senior walk-on player at Florida State. "It just
doesn't seem fair for it to end that way."

Dozens of Bryan Pata's former high school teammates also
attended the funeral, many lamenting how close he came to realizing
his NFL dream.

"He was almost there. It was so close," said Daniel Maceaus,
21. "He was on top of his game and not everybody likes that."

The Hurricanes canceled their regularly scheduled Tuesday
afternoon practice. The team will attend Wednesday's on-campus
memorial then resume practice that afternoon. Miami's next game is
Saturday at Virginia.

"This has been a tough time and I'm very proud of how the
players and coaches are responding," Coker said Tuesday before
arriving at the funeral. "That's been very encouraging."

Pata had practiced with the Hurricanes the afternoon of Nov. 7
and stayed for a quick, informal team dinner before leaving campus,
officials said. Police were called to the apartment complex about
two hours after practice ended. The 6-foot-4, 280-pound defensive
lineman died at the scene.

Police have released very few details about the investigation.
Detectives interviewed several Miami players in the hours after
Pata's death, and have urged citizens who may have seen or heard
something that evening to come forward.

Family friend Edwin Bonanne expressed frustration that no
arrests had been made.

"It's real difficult because there's someone out there that
caused this murder," Bonanne said. "It's real hard for the
family."

Pata played in 41 games over his four-year career at Miami,
making 23 starts, and was expected to be chosen in next year's NFL
draft.

Teammates wore decals with his No. 95 on their helmets last
weekend when they played Maryland and will continue to wear them
for the remainder of the season.

Other schools around the Atlantic Coast Conference have also
offered tributes; Maryland's players donated their meal money from
last weekend's game to a fund set up for Pata's family, and Florida
State also wore Pata's number on their helmets for its game last
weekend against Wake Forest.