Former Alabama quarterback Brodie Croyle once said that Mike Shula had a quiet confidence about him that was infectious.

Try telling that to the Crimson Tide fans right now. Their confidence in the 41-year-old Shula is quickly eroding, and there's nothing quiet about it.

Shula, who was given the dreaded vote of confidence by Alabama athletic director Mal Moore prior to the inexplicable home loss to Mississippi State, has been pillaged on radio talk shows and Internet message boards by those convinced he's in over his head as Alabama's head football coach. The Crimson Tide (6-5, 2-5) have tumbled back into the bottom half of the Southeastern Conference this season after winning 10 games a year ago.

The unrest will only grow louder if Shula loses his fourth straight Iron Bowl this weekend to Auburn.

It's one of those simple truths when it comes to Alabama football. Houndstooth hats will always be in vogue. The shadow of Bear Bryant isn't going away, and anybody who makes a habit of losing to that "other" team in the state better have a good real estate agent.

For Shula, it's compounded even further because he hasn't beaten much of anybody who counts since stepping into a mess in 2003 that no one, not even the most irrational Alabama fan, could have thought would be a quick fix.

The program had just been hammered with NCAA sanctions, and Shula came aboard in May after former head coach Mike Price had spent all of spring practice installing a brand-new offense and was then fired in the wake of the strip club episode.

It was going to take time. The question now, as Shula wraps up his fourth season at his alma mater, is: How much is enough time?

There are some telling numbers that clearly don't help Shula's case.

He's just 2-15 against Arkansas, Auburn, Florida, LSU and Tennessee; 3-15 against SEC teams with winning records and 4-13 against nationally ranked teams.

Since Shula returned to the Capstone, Alabama has yet to come back and win a game in which it was trailing heading into the fourth quarter.

And in games decided by seven points or less, Shula's record is 5-12.

Of course, all those numbers wouldn't look nearly as ugly if the Crimson Tide can figure out a way to win the one that counts double (maybe even triple) this weekend. 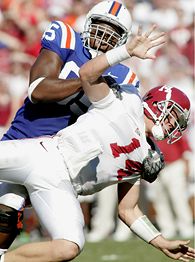 "I know he wants us to win more than anybody on this team, [Shula] and all the coaches," senior fullback Le'Ron McClain said this week. "I know they're tired of hearing it.

"That's the first person I'm going to go hug after we win this game Saturday."

The rumors about Shula's imminent departure and all the candidates lining up to replace him only escalated in the aftermath of the Mississippi State loss. Not only had the Bulldogs gone 23 straight games without winning on the road in the SEC, but there was also the Sylvester Croom factor.

A former All-American center at Alabama and one of the Bear's favorites, Croom finished second to Shula for the job in 2003 despite having more experience. After Alabama passed on Croom, he was hired the next year at Mississippi State, becoming the SEC's first black head football coach.

Shula has done his best to block all the talk out. He knows the only thing that's going to make his life easier is winning -- and winning over the right people.

Still, he downplayed what a win over Auburn would mean for him personally.

"It's important for our whole university, and I'm a part of this university," Shula said. "It's important for everybody to go out there and coach our best and play our best. We've been close against some good football teams, but we haven't done what it's taken there at the end of the game to finish the game off. That's what we have to get done on Saturday."

The bigger picture for Shula is finding a way to pump some life into an Alabama offense that has run on embalming fluid for much of his tenure.

"It's important for our whole university, and I'm a part of this university. It's important for everybody to go out there and coach our best and play our best. We've been close against some good football teams, but we haven't done what it's taken there at the end of the game to finish the game off. That's what we have to get done on Saturday."
-- Alabama coach Mike Shula on the importance of beating Auburn

Shula calls his own plays, and even if he survives as head coach, it will almost certainly be recommended to him that he go out and find an offensive coordinator who can bring some imagination and creativity to an offense that has scored fewer touchdowns than anybody in the SEC this season with the exception of Mississippi and Mississippi State.

Make no mistake, Shula's in a tough spot. But the administration at Alabama may be in an even tougher spot.

Remember, Alabama president Robert Witt said heading into the Auburn game last season that Shula had proven himself and that should be reflected in his contract. Sure enough, Shula received a big raise that took him to $1.55 million annually and extended his contract through the 2011 season.

Now, if he's fired a year later, he's owed a $3 million buyout, and the Tide would be looking for its fifth head coach since the 2000 season.

How realistic is that search?