Colt Brennan audibles for the first time in the conversation.

After all he's been through -- the trial, the sentence, the seven days in jail, the criticism, the embarrassment, the island escape, the fresh start, the rise to glory -- Brennan can't decide whether or not he's a fatalist. 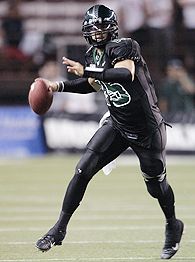 "There is that whole belief, things happen for a reason," said Brennan, Hawaii's superstar junior quarterback. "I go back and forth on it. I believe it sometimes, but I try not to believe it fully. I like to think you have a lot of say in what happens to you."

It makes sense why Brennan doesn't choose a side.

Right now, he's pulling all the strings in his life. No football player in America (sorry, Brady Quinn) possesses more control over a game than Brennan. He leads Division I-A in touchdown passes (43), total offense (401.9 ypg) and passing efficiency (189 rating), topping all three categories by wide margins. He steers a Hawaii offense that leads the nation in scoring (48.7 ypg), total yards (542.4 ypg) and passing yards (436.7 ypg).

Behind Brennan, the Warriors have scored 61 or more points in four of their last five games and have been held to fewer than 34 points only once this season. They enter Saturday's matchup with San Jose State on a seven-game winning streak.

"I can't imagine anybody in America is playing better football than him," Hawaii coach June Jones said.

Brennan is living the surreal life.

He spends each day in paradise. Practices in postcard conditions. Masters an offense most quarterbacks would give their non-throwing arms to run. Immerses himself in the carefree island lifestyle.

"I'm out here in the middle of the Pacific Ocean, just doing my day-to-day thing," Brennan said. "Living out here changes you. I didn't fight it, and if anything, I embraced it."

He had to. For Brennan, Hawaii was more than a refuge. It was a place to regain control, something he lost on Jan. 28, 2004.

That night, Brennan, then a freshman at Colorado, drunkenly entered a female student's room uninvited and didn't leave. He was charged with several crimes including sexual assault. Colorado, which at the time faced accusations of sex crimes involving several football players, quickly dismissed Brennan from the team.

Brennan was convicted of first-degree criminal trespass and second-degree burglary, but was acquitted of charges of sexual assault and indecent exposure. He was sentenced to seven days in jail and four years probation.

Brennan went through plenty of "rock-bottom things" after the events of that January night, but mixed in were moments of hope. "Sitting in that courtroom with not one person sitting behind the district attorney," he said, "there was not one person that sat behind him and there were 50 people sitting behind me. That's a statement. I almost felt like I won that case even though I kind of lost."

Brennan received similar support from coaches, teammates and teachers at Saddleback Junior College in Mission Viejo, Calif., near his hometown of Laguna Beach. He enrolled at the Southern California college after his dismissal from Colorado and led Saddleback to a conference title in 2004.
But the sting of shame remained.

"I was embarrassed," Brennan said. "I wanted to get away and then come back a new man, somebody different, somebody new. Hawaii really presented that to me."
Brennan had scholarship offers from five or six schools, including San Jose State, where his cousin, Brent, served as wide receivers coach. Jones didn't offer a scholarship but rather a promise: to make Brennan the first quarterback selected in the NFL draft.

"We were going through some things at the university, ticket price changes, trying to market different," said Jones, who has a history of taking players with checkered pasts. "I just said, 'You have some pending court things that I don't want to deal with right now. But if you're not smart enough to know that you'll be maybe the first quarterback taken in the draft if you walk on here, then you're not the guy I thought you were.'
"He walked on, and the rest is history."

Operating an NFL-style offense wasn't the only draw for Brennan.

Brennan's first connection with star wide receiver Davone Bess occurred nowhere near a football field.
In the summer of 2005, Bess and several other Hawaii players invited Brennan over to their apartment after a workout. At one point during the night, Bess went outside to take a phone call. When he hung up, he saw Brennan walking up the porch.

"Next thing you know, we had a heart-to-heart," Bess said. "Within 15 or 20 minutes into the conversation, we felt like we knew each other. We'd both been down the same road; we both went through the same situations."

Bess was sentenced to 15 months at a juvenile detention facility after being convicted as an accessory for possessing stolen goods in July 2003, two weeks before he was set to begin his collegiate career at Oregon State.

"Our situations were totally two different scenarios, but we both had the finger pointed to us without the proper evidence," said Bess, who enrolled at Hawaii four months after being released. "We both were pretty much taking life for granted. We couldn't be stopped. Everything was going so good for us. And then all of a sudden, bam! That's a reality check.


"Now you have no choice but to mature and man up, take it and learn from it, grow from it and tell others your situation."
That's exactly what both men are doing.

Brennan lives near Hale Ho'omalu, the main juvenile detention center in Honolulu. Several Sundays ago, the quarterback was walking by the center to get his morning coffee when one of the employees stopped him.
They began chatting. After several minutes, Brennan asked if he could talk to the detainees.

He spoke for an hour, sharing his story, instructing the kids to maintain strong relationships with their probation officers.

"They're talking to a convicted felon who also is a kid that's kind of idolized around the island right now," Brennan said. "For them, being in that juvie center, it gave them a lot of hope. They were sitting there thinking, 'God, my life is not ruined. I can make my life a lot better.' "

Brennan hopes to go back to Hale Ho'omalu this week. Last Sunday, he and Bess, who has also spoken at juvenile detention centers, attended a church service where Brennan gave a testimonial.

"Any time I can help out or make a difference," Brennan said, "I'm going to put myself out there to do it."

He's taking the same approach on the field. Last year, Brennan felt "like such an idiot" trying to figure out Jones' offense, but he still led the country in total offense (4,455 yards) and touchdown passes (35). This fall he's been a model of efficiency, completing 72.4 percent of his passes and throwing only seven interceptions in 380 attempts. Brennan is also dangerous on the run, averaging 5.1 yards per carry.

"Every time Colt scrambles, I'm running downfield, crossing my fingers, like, 'Oh my God, please get out of bounds or something,' " Bess said. "He wants to stick his head in there, get that extra yard."

Brennan's off-field troubles have made him fearless on Saturdays.

"My biggest weakness now is a poorly developed sense of fear and the fact that I've got no concept of the odds against me," he said. "I don't care about things as much as I used to. The fear is gone."

His numbers are unparalleled, but Brennan, much like Timmy Chang before him, often gets labeled a "system guy."

"Our offense is designed to put up numbers," Brennan said. "I don't understand why people want to talk that down. It's funny because I watch some of the guys, the Brady Quinns, the Brian Brohms from Louisville, and they get credited for big games when they throw for 280 yards and two touchdowns."

Jones is confident Brennan will get his just due when it counts -- on draft day.

"He will be the first quarterback taken," Jones said.
Whether that happens this April or next remains to be seen. Brennan's full intention is to return for his senior year, though he plans to gauge his draft stock following the season.

Was all this part of a grand plan for Brennan? Doesn't matter now.

"I'm so happy where I'm at, so happy with the way things are going," Brennan said. "That's the main thing, and that's the way I plan to stay."