AMES, Iowa -- Iowa State put forth its best recruiting pitch
to Gene Chizik, and succeeded in hiring one of the nation's hottest
young assistants as its next coach. 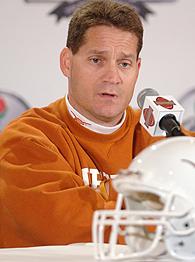 Chizik, who had served as the assistant head coach and
co-defensive coordinator at Texas for the past two seasons, was
introduced Monday night as Iowa State's football coach.

"I think the level of commitment is demonstrated," said
Chizik, who won the 2004 Broyles Award as the nation's top
assistant at Auburn. "They want to make this football program one of the strongest in the country."

Chizik, 44, will replace Dan McCarney, who resigned this month
after 12 seasons. Chizik agreed to a six-year deal worth $6.75
million, with incentives that could push his total package to more
than $10 million. In addition, Iowa State has earmarked $1.5
million plus incentives for Chizik's assistant coaches.

This will be Chizik's first head coaching job at any level. He
will not coach for Texas in the Longhorns' bowl game.

"To me, it's important for me for people to want you to be
there, that they target you as their guy," Chizik said. "I really
feel like I was recruited."

Iowa State athletic director Jamie Pollard interviewed Chizik in
Dallas on Saturday, the day after Texas lost to Texas A&M. He was
offered the job later that night, and accepted it during a phone
call with Pollard on Sunday morning.

"Gene just kept coming up as the hottest prospect out here, if
you can get him," Pollard said. "The more we drilled down, we
found traits about him that really -- we thought he got it."

It was reported on ESPN.com Sunday evening that Brian Kelly, the head coach at Central Michigan, was expected to become the Cyclones' new coach. That report proved to be incorrect.

Chizik came to the Longhorns before the 2005 season, and the
school won a national championship in his first season. By the end
of the 2005 season, Chizik's teams had won 28 straight games dating
to his years in Auburn, where he was defensive coordinator for
three seasons.

In 2004, the Tigers went 13-0 and finished the season ranked No.
2. Auburn had the nation's top scoring defense and ranked fifth
in total defense that season.

"He brought some fresh ideas, great energy and enthusiasm and a
tireless work ethic to our program," Texas coach Mack Brown said
in a statement released Monday. "You won't find anyone in our
program that has anything but great things to say about Gene. He's
a bright, young coach who has a tremendous future ahead of him.
He'll do a terrific job for Iowa State."

Pollard, who said Chizik was his top choice from the first day
of the search, breathed a sigh of relief when Chizik agreed to
terms, given the current number of coaching vacancies around the country.

"I knew from speaking with [Texas athletic director DeLoss]
Dodds that there were other schools that had contacted him to say, 'If we make a change, would he be interested?' " Pollard said.
"I'm ecstatic. I told [Chizik] on the car ride over here, 'I don't
know if you heard, but there were a lot of changes today. I'm glad
you're signed.'

"We're excited he's here because any one of those jobs, those
institutions would have loved to have a shot at him."

Chizik's arrival was heralded by Pollard as a new era in
Cyclones football, and the school pulled out all the stops in
welcoming him to Ames. He emerged from a smoke-filled inflatable
tunnel to a pep rally that included cheerleaders, about 2,500 fans
and the entire marching band inside Hilton Coliseum.

"I'm still expecting a rock star or somebody to come out behind
me," Chizik said. "This is truly a blessing."

Iowa State was 56-84 under McCarney. The Cyclones were picked to
finish second in the Big 12 North in the preseason coaches poll,
but stumbled through a six-game losing streak that included a 37-14
loss to Texas.

The hiring of Chizik is Pollard's third major move since taking
over on Oct. 1, 2005. Pollard hired former Northern Iowa coach Greg
McDermott to take over the basketball program in March, and he
promoted Olympic gold medalist Cael Sanderson to head wrestling
coach later that month.

Chizik met with Iowa State's players for about 30 minutes on
Monday. Many of them were very upset about McCarney's resignation,
saying they thought he deserved a shot to rebuild the program.

But wide receiver Todd Blythe said Chizik made a strong first
impression with the players.

"You can tell he's a no nonsense guy. That's something we need
in this program," Blythe said. "He told us he's not a guy that's
going to be content with five, six, seven wins, and that's exactly
how we feel as players."