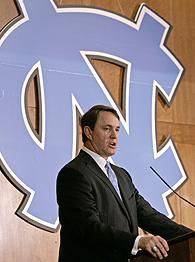 The night before his formal introduction Monday as North
Carolina's new coach, Davis was on the phone talking to recruits.

The message was clear: After two years away from the sidelines,
Davis was in a hurry to get back to work.

"My ankles have been taped waiting for this day," Davis said.

The former Miami and Cleveland Browns coach two weeks ago was
hired as the successor to the fired John Bunting, quickly accepting
the job of reshaping the struggling Tar Heels before other jobs
opened up across the country. He was considered one of the biggest
names available in the pool of coaching candidates.

Davis said during the summer he and his wife made up a wish list
of up to 15 jobs across the country that he would strongly
consider.

"The criteria of Carolina fit perfectly of what I thought was
an outstanding job," David said. "Outside of Carolina, there are
so many people who have great respect for this program. ... One job
that we did talk about was Carolina."

North Carolina gave Davis a seven-year contract worth about $1.7
million annually, with an additional undisclosed amount available
for meeting on-field and off-field incentives. The school also will
pay Davis a retention bonus worth $500,000 to $1.1 million if he
remains the Tar Heels' coach for at least five years.

Now his job is to build the Tar Heels into winners again. North
Carolina hasn't had a winning season since 2001 -- Bunting's first
year at his alma mater -- and the Tar Heels finished this year 3-9
only after winning their final two games.

"He said, 'If I got brought in here to win the Peach Bowl, then
you've got the wrong person,' " kicker Connor Barth said. "'I came
in here to go to BCS games.' That was something that was really
inspiring to me. He didn't come in just to win six or seven games.
He wants to win them all."

Athletic director Dick Baddour said Davis had been his top
choice since he started the search Oct. 23, the day after Bunting's
firing. The two came to an agreement after a three-week search that
included phone conversations and a meeting in Chicago; Davis said
he took the job despite never visiting Chapel Hill before he was hired.

Davis is perhaps best known for returning the Miami Hurricanes
to national prominence, going 51-20 from 1995-2000 despite severe
scholarship reductions and a one-year postseason ban because of a
lack of institutional control.

He left in 2001 for the Cleveland Browns, going 24-35 before
resigning in 2004 and working for two seasons in broadcasting. The
Miami team he left behind won the 2001 national title under Larry
Coker and reached the championship game the following season.

Davis asked for patience as he starts his latest rebuilding job.
North Carolina had one of the worst offenses and defenses in the
country this season.

"There is no magic formula that's going to be instantaneous,"
Davis said. "To bring those players, getting them to buy into the
goals and the visions that we have and help us create the
environment that breeds success ... that we go to the stadium every
single Saturday and expect to win. It'll be something that we're
going to strive for on every single day."