PISCATAWAY, N.J. -- After weeks of speculation about his
future, Rutgers coach Greg Schiano decided to stay at home. 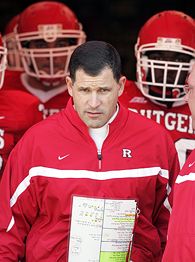 Amid talk he might return to Miami to take over the troubled
program, Schiano told Hurricanes athletic director Paul Dee on
Monday to take his name off a list of coaching candidates.

Two sources familiar with the situation told ESPN's Joe Schad that Schiano has been promised a reworked contract that will command at least $1.6 million annually, a raise of more than $500,000 a year.

Schiano said he had not signed a new contract with Rutgers, but
said his agent is in discussions with Rutgers officials. He made
$191,000 last year before athletic director Robert Mulcahy gave him
a seven-year extension that will max out at $350,000 by 2012.

The extension raised Schiano's annual income from private
sources from $325,000 to $625,000. With incentives, his total
compensation is in the $1 million range.

Larry Coker, meanwhile, had three seasons left on a contract that paid
him about $2 million annually. Coker was fired after going 6-6 in the regular season.

Once Schiano made it clear he was not interested in the job, Miami officials quickly turned their attention to Hurricanes defensive coordinator Randy Shannon and Texas Tech coach Mike Leach, sources told Schad. Miami officials, with the help of headhunter Chuck Neinas, plan to speak with at least four candidates before Wednesday.

Former Wisconsin coach Barry Alvarez is not considered a strong candidate to fill the Miami opening, a source close to the search told Schad on Monday.

Schiano, a New Jersey native, was Miami's defensive
coordinator in 1999 and 2000.

Schiano has orchestrated No. 16 Rutgers' rise from one of the
nation's lowliest programs in the past six seasons, and led the
team to its first bowl appearance in 27 years in 2005.

At 10-2 (5-2 Big East) this season after winning their first
nine games, the Scarlet Knights are headed to a Texas Bowl matchup
against Kansas State. Rutgers narrowly missed the Bowl Championship
Series and a likely FedEx Orange Bowl appearance by losing Saturday night
in triple overtime at West Virginia.

As Rutgers continued to win this season and Coker's position
became more tenuous, speculation grew that Schiano was one of the
top candidates, perhaps even No. 1, for the Hurricanes job.

Schiano never wavered from the message that he was happy at
Rutgers and looking forward to the program's continued growth -- yet
he never explicitly said he would stay at the school.

That only fueled more rumors, which persisted through the West
Virginia game and into Monday.

"People kept asking if it was a distraction for the players
during the season, but I knew once Saturday came that we needed to
address it and that's exactly what happened," Schiano said.

"He's maintained all along that this is where he wanted to be
and this is where he's going to be. He's a man of principle and
there's really no more to say about it," Mulcahy said.

Schiano had previously hinted that money issues were secondary
to Rutgers committing to make the upgrades necessary to field a
top-10 caliber team.

At the top of his current wish list is an expansion of
41,500-seat Rutgers Stadium. Several home games were sellouts this
season, including the final two games in which temporary bleachers
added 2,000 seats to the south end zone. Season ticket sales have
already increased by 5,000 for next season, Schiano said Monday.

He added that school officials "are all on the same page with
what we want to build here."

"We just need to keep moving forward. There are people
committed at Rutgers to taking it to the level we're talking about.
That's what's important to me," he said.

With the 40-year-old Schiano now considered a hot commodity in
coaching circles, Miami doesn't figure to be the last school to
come calling. Already there are whispers that Schiano has his eye
on replacing Joe Paterno at Penn State, another program where he
was an assistant.

For now, Schiano's enthusiasm for his current job remains
boundless.

"We're just scratching the surface here at Rutgers," Schiano
said. "The sky's the limit. We're going to do great things here.
We haven't done it yet. The seniors have laid the foundation for
really, really big things. We've recruited really great young guys
in this program and this is home."