STANFORD, Calif. -- Stanford opened the football season full
of optimism based on a renovated stadium, an offense that returned
nearly intact and progress that was made in Walt Harris' first year
as head coach.

Athletic director Bob Bowlsby saw a competitive spirit in Stanford last Saturday that he didn't recognize. Stanford pushed No. 21 California to the edge of an upset in the Big Game before falling, 26-17. If anything, that spirit may have sealed in Bowlsby's mind the decision to fire Walt Harris after only two seasons.

That quickly ended when the stadium was often half-empty, the
skill players went down with injuries and the Cardinal finished
with their worst record in more than four decades.

All of that played into the decision Monday to fire Harris after
his second season and begin the search for a new coach who can win
under the difficult circumstances at Stanford.

"This has been a tough year," athletic director Bob Bowlsby
said. "In some measure this decision was not made as a result of
being 1-11 as much as it was a result of not seeing the progress in
some of the critical areas we would have hoped for after two
years."

Harris finished his two-year stint with a 6-17 record after
losing 26-17 in the Big Game to California on Saturday. He had the
shortest tenure of any Stanford coach since Rod Dowhower left after
one season in 1979 with a 5-5-1 record.

The Cardinal finished with the most losses in school history and
the worst record since an 0-10 mark in 1960. 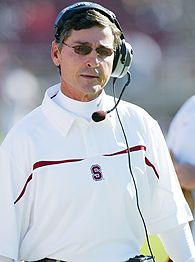 Stanford has struggled mightily since Tyrone Willingham left for
Notre Dame following the 2001 season. They have not had a winning
season in five years under Buddy Teevens and Harris, going just
16-40.

Bowlsby admitted it might not be "fair" to fire Harris after
only two seasons but that he had to do what was best for the
school.

"I think the most critical assessment I had to make was does
investing another year present the likely possibility of making
substantial improvement," he said. "If I couldn't answer that
affirmatively, which I ultimately didn't, I felt it was better to
make the change now than wait more time."

Harris was a disciplinarian who clashed with some players,
including linebacker Michael Okwo, who briefly quit the team in
November. Players complained of a communication gap with the
coaching staff.

"It was maybe just a bad fit," receiver Mark Bradford said.
"Maybe we didn't respond to the way that was his style of
coaching. His style of coaching probably would have worked in a lot
of other places. It didn't work here."

Harris declined to comment before leaving campus Monday, but did
thank the school in a statement for the opportunity to come back to
his native Bay Area.

"It was maybe just a bad fit. Maybe we didn't respond to the way that was his style of coaching. His style of coaching probably would have worked in a lot of other places. It didn't work here."
-- Stanford WR Mark Bradford on Walt Harris' firing

"Regretfully, I leave with a heavy heart, because we didn't get
the job done," Harris said. "I wish the Stanford players and the
program the best of luck as they rebuild."

Injuries on offense were a major factor this season. Bradford
went down for the year with a foot injury in the second week.
Fellow starting receiver Evan Moore missed four games, quarterback
Trent Edwards missed the final five games, and starting fullback
Nick Frank ended his football career two games into the season
after being diagnosed with a narrowing of a vertebra in his spine.

The offense never really got on track, finishing second-to-last
in the nation in total offense and scoring offense, and scoring two
offensive touchdowns in a game only twice all season.

"I think the injuries had a snowball effect," quarterback T.C.
Ostrander said. "They say winning cures everything. Had we won
more, some of this obviously might not have happened. Possibly
certain guys on the team felt a lot of distance between themselves
and the coaching staff. That might have been an issue."

Bowlsby acknowledged that winning at Stanford is difficult because of
the limits on recruiting at a school with such high academic
standards. But he said the Cardinal should be capable of anything
and said he'd look for a "relentless recruiter" who will embrace
what Stanford has to offer.

Bowlsby said he hoped to have a new coach in place in two weeks.
This is a critical time with the recruiting season heating up with
campus visits this weekend. Bowlsby said he would personally
contact any recruit who has committed to Stanford or been offered a
scholarship.