MIAMI -- Former University of Miami and NFL quarterback
Bernie Kosar would like to return to the Hurricanes -- as their next
coach. 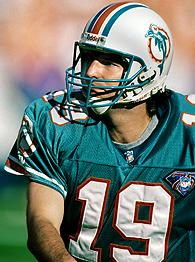 Miami television station WFOR reported Tuesday night that Kosar
would like the job, and The Miami Herald quoted Kosar in its
Wednesday editions saying "I'm interested."

"UM people knew that I had been offered the president of the
Cleveland Browns job," Kosar told the newspaper. "They knew I
wanted to get back into football and asked if I'd be interested in
the UM job. At first it was just flattering, but then I thought,
'Yeah, I'd really like to look into it."'

Kosar, who told the newspaper that he's had preliminary talks
with university officials about replacing Larry Coker as coach of
the Hurricanes, did not immediately return e-mails or phone
messages from The AP on Wednesday.

Kosar has no coaching experience, but he often serves as a
mentor to quarterbacks at Miami, where he serves as a university
trustee. He retired from the NFL after a 12-year career with the
Cleveland Browns, Dallas Cowboys and Miami Dolphins.

Coker was fired last month after Miami finished a 6-6 regular
season, dropping his six-year record at the school to 59-15. He
will coach the Hurricanes in their bowl game Dec. 31 against
Nevada.

Several candidates are in the mix to replace Coker, including
Miami defensive coordinator Randy Shannon and Texas Tech coach Mike
Leach, both of whom have had discussions with Hurricanes athletic
director Paul Dee about the vacancy.

Other potential candidates reportedly include Texas Christian
coach Gary Patterson and West Virginia's Rich Rodriguez, who has
also been mentioned as a possible replacement for Mike Shula at
Alabama.

Rutgers coach Greg Schiano -- a former Miami assistant -- said
earlier this week that he was not interested in the Miami job.

Kosar was a fan favorite as the Hurricanes quarterback from 1983
to 1984, leading Miami to a national championship as a freshman,
beating Nebraska in the Orange Bowl. The Browns got him in a
supplemental draft after he graduated early with a dual degree in
finance and economics.

Kosar threw 124 touchdown passes in his NFL career, with 87
interceptions.

It was a turbulent season in Miami -- with the biggest blow being
the death of Bryan Pata, who was shot and killed outside his
off-campus apartment complex on Nov. 7.

Even before that, a top wide receiver was suspended for much of
the season after getting involved in an altercation with two women,
a player was shot in an alleged robbery attempt where another
teammate returned fire at the purported assailants, and the
Hurricanes were involved in an on-field brawl with Florida
International which resulted in the suspension of 31 players, 13
from Miami.