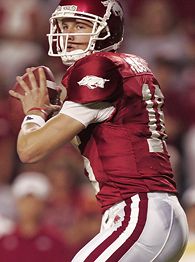 Houston Nutt quickly summarized the status of three freshmen whose roles in Arkansas' offense have made them the focus of drama at the tail end of the Razorbacks' first winning season in three years.

The Arkansas coach said Wednesday he would let Williams transfer amid concerns voiced by several parents about the direction of the Razorbacks' offense.

Williams' parents, along with those of two other freshmen, met with athletic director Frank Broyles last week to raise concerns that their sons might not be a good fit for the Razorbacks' system. Parents of Mustain and Cleveland were also at the meeting -- all three players went to Springdale High School.

Nutt said he believes Mustain and Cleveland are "100 percent committed."