LOS ANGELES -- Police say foul play was probably not a
factor in the death of Southern California kicker Mario Danelo,
whose body was found about 120 feet down a rocky cliff, leaving the
possibilities of accident or suicide. 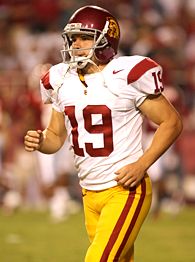 As friends and teammates resumed classes Monday after a holiday
break, investigators continued to examine evidence recovered after
Danelo's body was found over the weekend near Point Fermin
lighthouse in the city's San Pedro section. An autopsy was
scheduled.

Police Lt. Paul Vernon said Sunday there "didn't appear to be a
crime involved," and "it was fairly apparent that this was either
an accident or suicide."

Danelo's brother said it was "an unfortunate accident."

"He was a good kid," Joey Danelo said during a phone interview
with The Associated Press Sunday. "There was not a person I know
that didn't like him."

It could take weeks to obtain toxicology results that would
detect the presence of alcohol or drugs in his system.

Someone flying a remote-control airplane noticed something at
the bottom of the cliff Saturday and a friend hiked down to the
beach and discovered the body, police officials said.

Danelo was last seen around midnight Friday and investigators
were looking into whether he was out with friends.

"You keep asking yourself the same question," USC assistant coach Sam Anno said, according to the Los Angeles Times. "Why?"

"He was not the type of guy to let anything get him down," Will Collins, the Trojans' special teams snapper and a close friend of Danelo, said, according to the Times. "I never met a happier kid."

A makeshift memorial was placed on the cliffs above where
Danelo's body was found. A flag bearing the USC logo was spread
out, surrounded by flowers and candles and a message reading "Rest
in Peace Danelo" spray-painted on the ground.

Nearby, a sign warned: "Danger Do Not Enter Unstable and
Slippery Surfaces Steep Drops."

Fire Department spokesman Brian Humphrey said investigators did
not find a surf board, scuba-diving tanks or anything else to
indicate Danelo might have been down there for any of the
recreational activities common to the area.

Humphrey said over the years a handful of people had fallen from
the cliff.

"It's entirely possible that he fell," Humphrey said.

Danelo, the 21-year-old son of former NFL kicker Joe Danelo,
made 15 of 16 field goals this season and led the Trojans in
scoring with 89 points. The junior made two field goals in the Rose
Bowl last Monday to help USC beat Michigan 32-18.

Speaking on behalf of Trojans coach Pete Carroll, USC spokesman
Tim Tessalone said: "We were stunned to hear about this tragedy.
This is a great loss. Mario was a wonderful young man of high
character."