At least six juniors on Florida's national championship football team were considering entering the NFL draft. At least one will return, while four others have decided to pursue a pro career. 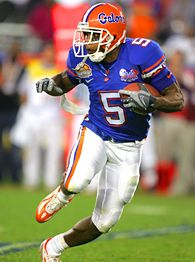 Wide receiver Andre Caldwell, who had 577 yards receiving and five touchdowns in the regular season and a TD in the Gators' BCS national championship game win over Ohio State, said Friday he will return for a senior season.

"I want another championship," said Caldwell, who was projected by the NFL draft advisory committee as a third-round draft choice. "I also want to work my way into a first-rounder."

"He's a better passer than anybody knows," Caldwell said. "I see it in practice every day."

Florida's offense should be strong next season.

"I talked to my brother Reche [former Gator with the Patriots] and he said, 'Enjoy your time in Gainesville, don't rush anything, the NFL will always be there,'" Caldwell said.

Later on Friday, junior defensive end Jarvis Moss, one of the nation's most-feared pass rushers, said he will enter the NFL draft.

Moss, at 6-foot-6, 251-pounds, was fourth on the Gators with 56 tackles, including 11 for loss. He had 7½ sacks and led the team with 12 quarterback hurries this season.
During his Florida career, Moss overcame hernia and hip injuries and a rare infection that caused him to lose 30 pounds

Moss also may have saved Florida's season by blocking a field goal late in a defeat of South Carolina.

"I've been through a lot in my career and having won a national championship, the timing couldn't be better," Smith said. "I know I'm a good corner who can cover and they need those guys in the NFL."

"I'll have to prove that I can play at my weight and that I'm durable for my size," said Smith, who transferred from Utah this season, where he once played for Urban Meyer.

Smith led the SEC with eight interceptions this season.

"I love Florida but I've taken it to the top and it's time to move on," Siler said.

Siler, 6-foot-2, 235 pounds, was second on the Gators with 77 tackles, including 10 for loss, three sacks and a fumble recovery.

"I've done everything I can accomplish in college and I've got my two kids to take care of," Nelson said. "I've been in school for a while having been to junior college."

Nelson said he could play safety or cornerback in the NFL.

"I'll bring speed, hustle to the ball, great character and a great personality," Nelson said. "I know the combine can make or break you. Nobody will work harder than me."