Coach Steve Kragthorpe got a huge boost for his first season as Louisville coach when junior quarterback Brian Brohm announced Monday morning that he is returning to school for another season. 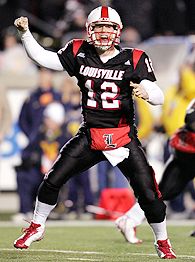 "I feel like there's still some things we can do here at the
University of Louisville," Brohm said Monday, adding he made his
decision Saturday night.

Brohm will be one of the top returning quarterbacks in the nation and a Heisman Trophy candidate.

As a junior, Brohm completed 63.6 percent of his passes for 3,049 yards and 16 touchdowns. Brohm's decision was made in part because Kragthorpe, the former Tulsa coach, is regarded as a quarterbacks guru.

Brohm said after leading Louisville to a 24-13 win over Wake Forest at the Orange Bowl that he was leaning toward returning for a senior season.

But then head coach Bobby Petrino left Louisville for the Atlanta Falcons. And junior running back Michael Bush declared for the NFL draft.

"This was a lot more difficult than anticipated because of all
the new factors that kept arising," Brohm said. "Coach left and
we got a new coach in. That was one factor. I wanted to see what
that situation was like and obviously I'm very happy with the coach
that [Louisville athletic director Tom] Jurich brought in."

Kragthorpe met with Brohm several times since
accepting the job on Tuesday in an attempt to get Brohm to remain
at the hometown school he helped put on the map.

Brohm, at 6-foot-4 and 224 pounds, would have been considered among the top three quarterbacks in this year's NFL draft. His aim now will be to be the top player in the 2008 draft. Brohm has thrown for 6,751 yards and 41 touchdowns in three seasons. Both marks are
fourth on the school's career list.

Kragthorpe said he looked forward to spending a year coaching
the prize quarterback.

"I think it makes a huge statement about his commitment, not
only to this program but to the city of Louisville," he said.
"He's going to lead this team to great things and great
heights."

Louisville started the season 8-0 before losing at Rutgers on Nov. 9. The Cardinals then won their final four games, including the Orange Bowl, to finish 12-1 and rank No. 6 in The Associated Press Top 25 Poll.