"In the end, I think I just realized that this is a business
decision and that it is time for me to take that next step,"
Peterson said in a statement released by the university Monday, the
deadline for underclassmen to declare themselves eligible for the
draft.

Peterson returned from a broken collarbone to run for 77 yards
and two touchdowns in Oklahoma's 43-42 overtime loss to Boise State
in the Fiesta Bowl. He had been sidelined for seven games with the
injury, suffered Oct. 14 on a touchdown run against Iowa State.

Peterson's final carry in an Oklahoma uniform was a 25-yard
touchdown run that put the Sooners ahead 42-35 on the opening play
of overtime in the Fiesta Bowl.

Peterson opted not to hold a news conference to announce his
decision, but said in the statement that he considered his
relationships with teammates as a reason to stay at Oklahoma. He
said his parents and Stoops were among the people
that advised him. 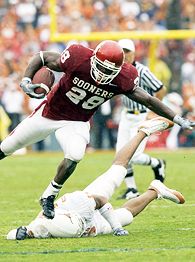 "The last few days have been stressful," Peterson said. "I've
been pondering a lot of things and looking at it from all the
different angles, weighing the good and the bad."

Peterson ran for 4,045 yards in three seasons, ranking behind
only 1978 Heisman winner Billy Sims (4,118) and Hall of Famer Joe
Washington (4,071) on Oklahoma's career rushing list. His 1,925
yards in 2004 were a school rushing record and the most by a
freshman in NCAA history.

He started that season with an unprecedented nine straight
100-yard games. Peterson also finished second to Matt Leinart in
voting for the 2004 Heisman Trophy, the highest showing for a
freshman.

Peterson had shoulder surgery in the offseason after his
spectacular freshman season, then sprained his ankle and missed
parts of four games as a sophomore.

"There were some things that we didn't accomplish," Peterson
said. "I didn't really do all of the things I set out to do. Those
things, the guys and the love for college football were things I
thought about."

He still finished the season with 1,012 yards rushing and 12
touchdowns.

"I know this has been a trying time for him and he just needs
to know that we support him wholeheartedly," Stoops said. "Adrian
has been a great individual player and a great teammate."