When Randy Shannon thinks about growing up in the Liberty City section of Miami, the first thing that comes to mind is all the grandmothers who used cherry tree branches to spank the children they saw misbehaving. 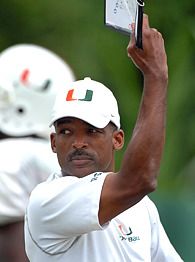 "Everybody in the projects took care of each other," said Shannon, Miami's first-year head coach. "In my life, there were plenty of times you went three or four days wearing the same clothes, but we had food on the table and you had better be there when served."

Shannon boasts of his mother, a nurse's aide who cleaned office buildings at night. He speaks less often of what they survived together.

When Shannon was 3, his father was murdered. Since then, he's lost three drug-afflicted siblings to AIDS and saw one brother jailed for stealing Shannon's identity. All of this puts the challenge of taking over a Canes program rich in tradition and championships, but on a downward slide over the past five seasons, in perspective.

"I don't dwell on those things and I will never go in the tank," said Shannon, a former Miami linebacker and longtime assistant. "I will never feel my world is coming down. You have to control the world. You can never let it control you."

Shannon, the top choice among players to succeed Larry Coker and a man known for his tough-love approach, tells his players the world isn't fair. And perhaps it would not have been fair if one of the most successful defensive coordinators in the country, a 41-year-old who embodies what it means to be a Cane, had been passed over.

"When I came to Miami I sought out Randy Shannon and asked him about the way they played, about the tradition of the place," said Arizona State coach Dennis Erickson, who as Miami coach in 1991 hired Shannon as a graduate assistant. Miami won a national championship that year, one of five the Canes have claimed since 1983.

Miami lost six games last season, including five in the ACC. Shannon took a job that was passed on by Rutgers coach Greg Schiano, and he takes personally the perception that it's no longer considered a top-notch position.

"You have to ask yourself, 'Can Miami win a national championship this year?'" Shannon said. "Well, how many other teams in America can say that? A lot of other people think it's not a great job because they get caught up in the money. Are you in it for winning and for the kids or are you in it for the money?"

Miami's athletic department cannot spend freely and some facility improvements are overdue. Shannon also tries to debunk perceptions about crime and violence in South Florida. Miami's rivals reminded recruits of the brawl with FIU and the murder of Bryan Pata last season to dissuade them from joining the Canes, but Shannon still landed the nation's ninth-rated class, according to ESPN's Scouts Inc.

"This isn't a perception that's come about over the last five years," Shannon said. "How about the last 20 or 22 or 26 years? The whole stereotype started with "Miami Vice" and the thought that we were all about drug lords and shootings. You know what? The same things that have happened at Miami have happened at other campuses."

Shannon went so far as to draw a parallel between the labeling of Miami as a renegade program and that of him as a minority coach.

"My senior year, Notre Dame had three fights and nobody said anything about it," he said. "What everyone should do is accept that Miami is just a regular program. Just like me. I'm a regular coach. Don't stereotype the program and don't stereotype me and put me along with Tony Dungy and Lovie Smith and Karl Dorrell. Just call me a coach of a football program and we'd all be better off."

On the field, Miami was nearly upset at Duke last season, one example of what Shannon candidly means when he said that last season, at times, "I think guys got relaxed." It's about not accepting mediocrity, a lesson he took from Jimmy Johnson, the head coach when Shannon played for the Canes and who coached the Cowboys during Shannon's two years as a player with Dallas.

It's also about what Shannon learned from former Miami coach Butch Davis.

"He always had you on edge," Shannon said. "Everything was a panic. No comfort zone. If you had to sign three linebackers, he wanted four. With Butch, you never knew where he was coming from."

Shannon has a list of strict rules. Among them: no hats or cell phones in the football facility and no hats at dinner. He also sets aside time to speak with his players about how to treat women.

"You open the door for a young lady," Shannon says sternly.

Shannon has studied in Miami classrooms, been a Canes graduate assistant, defensive line coach, linebackers coach and defensive coordinator. And more than anything, he understands what Miami football means to the city in which he was raised.

"If you want to go someplace where things stay the same and there's no pressure, leave Miami," Shannon said. "In this city, it's all about winning. This city thrives on the University of Miami. The team is upbeat, the city is upbeat, it's something to have pride in, when we're winning. We've won a lot. And we're going to win more."