Bob Toledo has seen almost everything in more than 35 years of coaching. And he saw a lot of the world when he stepped away from college football for three years. 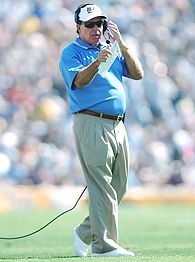 But almost nothing could have prepared him for what he experienced as he crisscrossed the state of Louisiana, driving to 76 high schools in three weeks after his hire.

"Devastation," Toledo, the first-year Tulane coach said. "It was incredible. I felt so bad for those people who lost everything. And yet they were going back to their schools. I visited with kids in Baton Rouge who were displaced by Hurricane Katrina, who want to come back, who want to be recruited by Tulane."

It's one of the biggest reasons why at the age of 60, five years removed from his tenure at UCLA -- highlighted by a string of 20 consecutive victories -- Toledo wanted one last chance to be a head coach.

"If we can get this done, what it would be is a meaningful experience for everyone," Toledo said. "I see these kids and I know how hard they're working. I know how badly they want to win and how they're looking for someone to lead them. We need to change attitudes, and we need to change image."

Tulane was struck hard by the devastation of Katrina. Its athletic department has been reduced to eight sports and the school plans to add eight more by 2010, when a waiver from the NCAA granting Division I status expires.

Although Tulane was able to return to the Superdome last season, coach Chris Scelfo was let go with a record of 37-57 in eight seasons. For some reason, the New Orleans community did not embrace the Green Wave the way they did the NFL's Saints.

"We need to ride those coattails," said Toledo, who spent last season as assistant head coach and offensive coordinator at New Mexico. "We need to catch that wave."

Tulane athletic director Rick Dickson interviewed younger candidates, but felt that the best fit for the program was a low-risk hire with a proven track record as head coach. Toledo was 49-32 in Pasadena, leading the program to four bowl appearances and two Pac-10 titles.

One of Toledo's closest friends is Auburn offensive coordinator Al Borges, a former assistant at UCLA. "What Bobby wanted was a chance to go out as a head coach on a positive note," Borges said. "He had a pretty good record at UCLA and this is a chance for him to build a program from the ground up. I think it's what he deserves."

Toledo spent three years away from football, which seemed like an eternity.

"The day I got fired from UCLA, I saw my granddaughter born," Toledo said. "So I had one of the best experiences of my life. I spent time with my wife. We traveled to Oregon and Washington and Alaska and Florida and Texas and Arizona and Hawaii."

And yet, football never escaped his blood. He'd sneak away and watch college and pro football games on television. "It turns out I wasn't burned out," he said. "It turns out I still had a lot of energy and excitement and knowledge. I wasn't over the hill."

Aside from attempting to reconnect with high school coaches and players across the state of Louisiana, Toledo will try to sell his reputation as a high-octane, offensive-minded coach who loves calling trick plays.

Toledo has the benefit of a new practice field, locker room, training room and weight room, all of which had to be rebuilt after severe flooding. But recruiting to a place that hasn't won recently, in a city where crime is an issue, can be a challenge.

"Daddies want their players somewhere with people in the stands," Toledo said. "And Mommies want their kids to be safe. It was an obstacle, but I talked about how there is crime in many urban areas and how Tulane is uptown, where everything is coming back."

Toledo tells a story that might seem illogical to some, but shows the confidence he has in himself, his ability to sell a program and what he hopes to do before a planned retirement in five or six years.

It's about the day he offered a scholarship to Joe McKnight -- yes, the McKnight who signed with USC, the Curtis High School running back considered the nation's top player by Scouts Inc.

"Everyone said it was down to USC and LSU and all that," Toledo said. "But I wanted to hear it from his mouth. I've told jokes and this was no joke. He appreciated visiting with me and no, he didn't come. But I think the lesson is this: I want to be told no. I don't want to ever assume that we don't have a chance."