For 23 years, Air Force football was synonymous with coach Fisher DeBerry and the option offense that helped make him an icon. 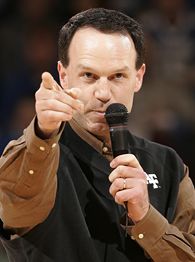 Next season, both will be gone.

Sure, first-year coach Troy Calhoun -- who ran the option as DeBerry's quarterback in 1985 -- will showcase some vintage plays. But after three consecutive losing seasons, Air Force was ready for a jarring change.

"Defensively, the speed of the game has drastically increased over the last 20 years," said Calhoun, offensive coordinator of the Houston Texans last season. "You have to utilize misdirection, but also find ways to get the ball up-field in a hurry. If you have too much East-West stuff, with our competition, that field will shrink."

Think a combination of old-school Air Force meshed with the influences of Wake Forest (Calhoun was an assistant under Jim Grobe there and at Ohio) and the Denver Broncos, where Calhoun coached under Mike Shanahan.

"The first seven days of spring will tell a lot," Calhoun said. "Does it absolutely have to be the triple option to succeed at an academy? Only time will tell what is the case."

From the porch of his beachside home in Charleston, S.C., where he and his wife have retired, DeBerry said there won't be sadness in watching Air Force play without an option base.

"No, not really," DeBerry said. "I really want them to be more successful than we were. And if it takes something different, so be it. I bleed blue."

Of course, there's no hesitation when explaining what the option offense meant to him and the program for nearly a quarter-century. DeBerry left Air Force as both the school's and the service acadamies' winningest coach, racking up a 169-107-1 record that included three wins over Notre Dame and three Western Athletic Conference titles.

"It gave our kids a chance to win," DeBerry said. "And our kids took pride in running it. The option is a tough offense to get ready for in a short period of time. It's a great offense for the service academies and Paul Johnson is proving that at the Naval Academy. It has also been proven to work at Army."

That said, DeBerry stepped aside at the age of 68 -- with three years left on his contract -- because the Air Force administration was eager for, as athletic director Dr. Hans Mueh said, someone to "re-instill fire and passion."

Calhoun is serious, in contrast to the folksy DeBerry. He's polished enough to say of the need to beat Army and Navy: "They're key games, but so are our Mountain West games."

And he's respected for what he did as a player at Air Force, as a former recruiting coordinator in Colorado Springs and also for his work as an NFL assistant. In his time with Shanahan, Calhoun coached offense, defense and special teams.

Calhoun emerged as the obvious successor to DeBerry -- who recommended him -- because he understands the unique challenges of coaching at a service academy.

"Candidly, in this day and age, in the summers, June and July, you have a good chunk of schools lifting and conditioning and doing team work and 7-on-7," Calhoun said. "Here, our guys are going to find out what active duty is like. They'll do three weeks at a base, three weeks in a leadership capacity. And then there's the academics. We have guys taking aeronautical engineering and physics. A lot of guys."

It's not about excuses. Calhoun sees it as an advantage that offensive and defensive linemen at Air Force cannot have a percentage of body fat as high as those at other programs, because they'd never pass mandated fitness tests.

"You just have to make sure in the way you play, that you're playing to the strength of your team," said Calhoun, who saw undersized offensive linemen effectively block for the Broncos. "It's not scheme. The way you win at Air Force is attitude."

Calhoun, at the age of 40, is just the sixth coach in the history of Air Force football.

"He's going to be a dynamite coach," DeBerry said. "He was always such a student of the game. And an excellent competitor. As far as I'm concerned, the greatest compliment you can be paid is to be asked to come back to your alma mater."

Calhoun says he can't express with words what DeBerry has meant to him and Air Force, but that he's going to take the former coach's last bit of advice to heart.