A funny thing happened Thursday about the time Tennessee's football team was wrapping up one of its spring practices.

Earlier that afternoon, Tennessee athletic director Mike Hamilton had gone on a radio sports talk show in Knoxville and revealed that Fulmer wouldn't be getting a raise for a second straight year, although he would be receiving a two-year contract extension.

It wasn't a huge surprise, especially when you consider that Fulmer already makes $2.05 million and that the Vols flamed out last season in a disappointing 20-10 Outback Bowl loss to Penn State.

But here's the catch: Fulmer was caught off guard when reporters began quizzing him about his contract after practice that day. He had no idea that Hamilton had announced anything or that anything had been finalized, and neither did his agent, Jimmy Sexton.

Later that evening, Tennessee officials scrambled to get out an official release to announce Fulmer's contract status while Hamilton was conveniently unavailable to explain the whole fiasco. 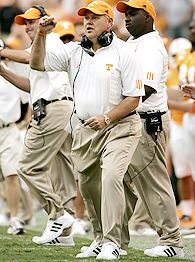 But there's also a subtle message tucked somewhere in Hamilton's faux pas, whether anybody will admit it or not.

Hamilton is on record as saying his expectations at Tennessee are to win at least two SEC championships during a 10-year period and get to the SEC title game every three or four years, as well as play in BCS bowls with some regularity.

The Vols clearly have been swimming in those waters. Since 1997, no SEC team has won or shared more divisional titles than Tennessee with its five (1997, 1998, 2001, 2003 and 2004). But the rub comes from the Vols not winning an SEC title since their 1998 national championship season. That's eight years and counting, and it's been seven years since they went to a BCS bowl.

So when you add it all up -- despite Fulmer's 137-41 career record, despite his years of service to his alma mater and despite his remarkable consistency (the 5-6 season in 2005 was the only time he's won fewer than eight games in his 14-year career) -- could it be that Fulmer's window at Tennessee is closing?

He refuses to look at it that way. Like anybody else, he wants to be appreciated. But what he wants more than anything else is to bring another championship back to the place at which he's spent more than 30 years playing and coaching.

Fulmer has proved time and time again that he's at his best in these types of situations. The Vols rebounded from their 5-6 disaster in 2005 with a 9-4 finish last season. The loss to Penn State was a bad way to end a season that sort of teased fans. There were the drubbings of California and Georgia, but there were also the bitter home losses to Florida and LSU in which Tennessee couldn't hold on to fourth-quarter leads. Still, the Vols at least moved closer to being a legitimate SEC contender again.

The question now: Can they take that next step?

"We still have that chip on our shoulder," said junior linebacker Jerod Mayo, who's moving to the middle from his weakside spot. "I still remember that 5-6 season, and then for Penn State to run the ball like they did on us  we all felt very disrespected. We still have a lot to prove."

The truth is that the Vols might be better suited to contend for a championship in 2008 than next season. They have big holes to fill on both their offensive and defensive lines, and that's never a good thing going into an SEC season. Fulmer agrees that the biggest difference between the Vols' most recent teams and their strongest teams in the 1990s can be traced to the guys up front both offensively and defensively.

The defensive line is of particular concern to Fulmer, who admitted last season that the Vols didn't look like they normally look up front after losing senior tackle Justin Harrell to a torn biceps. There wasn't a John Henderson running around or a Shaun Ellis or a Darwin Walker or a Albert Haynesworth. 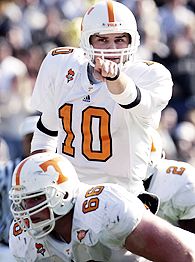 It will be a struggle again next season because there isn't much depth and aren't any proven All-SEC caliber players returning on the defensive line. The Vols finished with just 17 quarterback sacks in 2006. The previous low under Fulmer was 28, and since John Chavis was promoted to defensive coordinator in 1995, Tennessee had averaged 36.2 entering last season.

The Vols also uncharacteristically had trouble stopping the run last season. They gave up 146.7 yards per game on the ground, ranking eighth in the SEC.

"We'll be better up front, the front four and the linebackers," Mayo said. "Our main focus this spring is stopping the run. I feel like we'll be more physical and faster than we were last year."

Offensive coordinator David Cutcliffe, who helped bring the Vols' passing game back to life in 2006, is putting in a no-huddle attack this spring. He has full confidence in senior quarterback Erik Ainge and wants to have more flexibility at the line of scrimmage. The Vols still have to get more out of their running game, though. They got away from it last season, gaining 108 yards per game and finishing 10th in the SEC.

"We weren't a bad running team [in 2006]," Cutcliffe said. "We chose to throw the football. But as I look at this team, I don't think there's any question that we have to be a better running team to present the kind of offense we've got to have to do what we all ultimately talk about, and that's score enough points to win."

Particularly with Florida basking in its national championship from last season, Fulmer is well aware of how restless and how hungry the Tennessee fans are to hoist another trophy. He assures them that they're not any hungrier than he is. Considering Florida and Georgia both suffered major losses, the Eastern Division should be wide open next season.

Fulmer -- who will turn 57 on Sept. 1, the day the Vols open the 2007 season at Cal -- is contracted through 2013 with his two-year extension. Those closest to him insist he has no interest in coaching well into his 60s. Fulmer's wife, Vicky, suggested he walk away after winning the national title in 1998 with the rationale that it's never going to get any better than that.

But whether or not his window is closing, Fulmer is convinced there's more out there, another championship to win. He's ranked sixth in career SEC wins with 89. Most of the guys ahead of him -- Bear Bryant (159), John Vaught (106) and Ralph "Shug" Jordan (98) -- have stadiums named after them.

"I feel great, and I think there's a lot more to do here," said Fulmer, who has been working out regularly and has trimmed down noticeably. "I absolutely think we can win another championship, maybe more than one, and that's what we go to work every day to accomplish."