AUSTIN, Texas -- His teammates joke that they notice new biceps on Texas quarterback Colt McCoy more than ever before.

A buffed-up McCoy might still bear a striking resemblance to the title character of "Malcolm in the Middle," even at a hulkish 210 pounds. But McCoy said the added weight should have him better prepared for his second season as the Longhorns' starter. 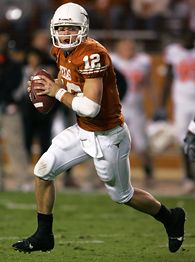 "I need to be," McCoy said. "I'm tired of being thrown around and I don't want to get hurt again. I spent a lot of time in the weight room to get ready for the season. Everybody has."

McCoy's dedication for preparation has mirrored that of his team, which is aiming to rebound after last season's 10-3 record.

The Longhorns collapsed down the stretch with late losses against Kansas State and Texas A&M. Those defeats -- triggered in large part by a neck injury to McCoy -- cost them not only a potential chance to challenge for the national championship, but also an opportunity to repeat as the Big 12's South Division champ.

That late slump has brought an attitude change for the Longhorns, who return 13 offensive and defensive starters and 46 lettermen from last season's team.

And while the lineup might not be dotted with the star power of some of his previous teams, Texas coach Mack Brown is excited about the chemistry of his team as it begins spring practice.

"We feel like we're in better shape because we've got a lot of depth," Brown said. "We have fewer stars on this team than probably any we've had since we've been here. There are a lot of talented young guys, but fewer stars."

Brown said the rebuilding job for his upcoming team might be his most extensive since his first season at Texas in 1998.

"It really is exciting," Brown said. "It's fun to go back and try to have your best team with maybe not your best personnel."

But before anyone feels sorry for Brown, remember this is still Texas. And the group of young players who will start to get their opportunities this spring came to the Forty Acres nearly as ballyhooed as players like Vince Young, Roy Williams, Cedric Benson and Derrick Johnson before them.