Bobby Reid grew up late last season, developing a sense of maturity that was missing in his first two seasons of college.

The Oklahoma State quarterback said the change came after he was benched late in the Cowboys' loss to Oklahoma. Reid had been injured earlier in the game and thought he was ready to re-enter the game. While cameras caught Reid pouting along the OSU sideline about not going back in, backup Zac Robinson nearly led the Cowboys to a late comeback victory over the Sooners. 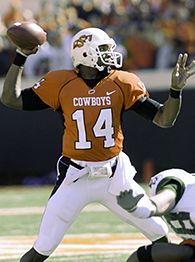 "It was a time of the game I felt like I should have been back in," Reid said. "I was mad, and my emotions took over. I shouldn't have let it show, but it happened."

After the game, Reid met with OSU offensive coordinator Larry Fedora and coach Mike Gundy to explain his feelings. The clear-the-air session helped Reid and his coaches get on the same page.

Reid was back in the starting lineup for the Cowboys' Independence Bowl game against Alabama. The new confidence helped him engineer a late 34-31 victory, a success in a tight situation like those his team had struggled with on several occasions earlier in the season.

That late comeback and the return of most of his offensive weapons has Reid eager about the start of spring practice and what his team can accomplish this season.

The bulk of OSU's offense returns -- including 100 percent of the rushing and passing yards and 75 percent of the Cowboys' receiving yards. Only wide receiver D'Juan Woods is gone among the major contributors who helped the Cowboys produce 35.2 points (seventh nationally) and 409.8 yards per game (16th nationally).

OSU's biggest area of improvement last season came at quarterback, where Reid finally fulfilled the promise many predicted when he was one of the top recruits ever attracted to the school.
Reid passed for 2,266 passing yards and 24 touchdowns and rushed for 500 yards and five more scores last season. He finished as the nation's 16th-best passer and was voted by coaches as the winner of his team's outstanding offensive player award.

Those strong numbers are a big improvement from his injury-riddled freshman season, when he completed only 48.1 percent of his passes and threw more interceptions (four) than touchdown passes (two).

"He was in a difficult situation when he got here," Gundy said. "He was one of the top five recruits in the country, and everybody expected him to everything fast. He got better last year, but what we accomplished last season is over with."