Streaming video should accompany every syllable of this story, because words cannot do justice to the budding YouTube legend that is University of South Florida rising sophomore quarterback Matt Grothe. 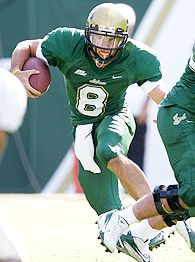 In fact, you might want to make a quick trip to a fan Web site dedicated to Grothe before moving on. Cleverly titled mattgrothe.com, it will link you to some of the most amazing quarterback video this side of Steve Young's miraculous touchdown run against the Minnesota Vikings 19 years ago.

Watching Grothe, you half expect the Burger King guy to pop into the picture and try to tackle him.

Tampa, Fla., resident Matt McDonough, 33, created the site as part of his master's project at USF.

"It's pretty cool that there are people out there who like what you're doing," said Grothe, who has not met McDonough and is not affiliated with the site, which includes biographical information, statistics and the like.

McDonough, his wife and two small children enjoy the rare distinction of being USF season-ticket holders.

The idea for the site came to McDonough the night of Grothe's first game at USF, last year's season-opener, when Grothe came off the bench and sparked a comeback victory over McNeese State.

"The first pass he threw was 40-something yards," said McDonough, a technical writer and Web designer for The Nielsen Company. "I said, 'Oh my God, we finally have someone who can throw the ball!' I registered for the [site address] that night.'"

"I've been a quarterback since I was in, like, fifth grade. They asked what position I wanted to play. I said quarterback. I have no idea why."
-- Matt Grothe

Start with the one he makes against Pitt, when defensive tackle Gus Mustakas breaks through the line, grabs the 6-foot-1, 190-pound Grothe by the jersey and tosses him backward like a sack of potatoes. Grothe's knees never touch the turf. He pops up like a cat dropped from a tree, darts toward the right sideline and completes a 22-yard pass.

Later in the game, Grothe makes a spinning, change-of-direction scramble for 24 yards.

Next, check the touchdown pass Grothe throws against Syracuse while being dragged to the turf, the gorgeous 79-yard touchdown strike to Taurus Johnson and the dive to the pylon against Connecticut.

Grothe has been playing this way for as long as he can remember. He grew up 35 miles from the USF campus, idolizing Brett Favre, Troy Aikman and, of course, Steve Young.

"I've been a quarterback since I was in, like, fifth grade," Grothe said. "They asked what position I wanted to play. I said quarterback. I have no idea why."

USF coach Jim Leavitt couldn't be more grateful to have Grothe under center. Grothe was the most productive freshman in college football last season, rolling up 246 yards of total offense per game, good for 17th in the country, and 24 touchdowns (15 passing, nine rushing).

In the Big East, he finished third in passing yards per game (198.2) and 10th in rushing yards (47.8). He is the main reason the Bulls are considered Big East contenders this coming season. 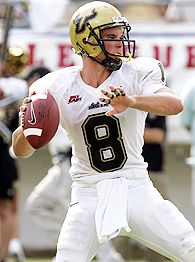 Leavitt's also grateful that Grothe was ready for spring drills. It didn't seem possible after he sustained a small fracture in his right fibula against East Carolina in the Papajohns.com Bowl on Dec. 23, but he avoided surgery and was back to his usual self when practice opened last week.

"He's full speed," Leavitt said. "He took off [last Friday] and dove to the end zone, but somebody got him by the foot just before the line. He's as live as can be."

Leavitt loves his quarterback's approach -- "I want a quarterback who's tough," he said -- but is concerned about how Grothe might react to his stunning success of 2006.

"He needs to stay humble, stay on edge," Leavitt said. "This is such a big media market, they'll probably feed him stuff, make him feel like he's better than he is."

It would help Grothe immensely if he doesn't have to be USF's leading rusher again. He was hampered by a foot injury for much of the '06 season and played the season without a go-to tailback because USF was ravaged by injuries and off-field issues at that position.

This year, there are several candidates at tailback, including highly touted freshman Mike Ford, who de-committed from Alabama.

"That would really help us with play-action passes and other things," Grothe said.

Grothe had plenty of options coming out of Lake Gibson High School, where he was a two-time state player of the year. One was to play defensive back at Penn State, but he wanted to stay close to home and lead USF, which began playing college football only 11 years ago and didn't join the Big East until 2005.

"I wanted to help start something," Grothe said.

Grothe's unique approach includes a smorgasbord of superstitions. He wears his "wrist" bands the same way every game, up near his biceps and refuses to wear an undershirt. He wore the same undershirt -- an Indianapolis Colts T-shirt -- every game from fifth grade through his senior year of high school before he burned it in a bonfire.

Lake Gibson's coach had each player burn something, by which they would remember their career.

"If I couldn't wear my Colts shirt anymore," Grothe said, "I wasn't going to wear anything."

Grothe doesn't seem overly impressed with his improvisational skills. That became evident when he was asked what gives him the biggest thrill on the field.

"Probably just having the opportunity to be out there," he said. "There aren't too many people in the world who can say they've played football on a Division I college field."

Fewer still who can say they've performed feats like Grothe.