TOLEDO, Ohio -- Nobody is home at the two-story bungalow Harvey "Scooter" McDougle Jr. rented a few blocks from the University of Toledo campus.

The house with three satellite dishes attached to its roof appeared empty Sunday during a visit by a reporter. School officials say McDougle remains a student and has retained his scholarship, but they don't know whether he's attending classes.

No matter where he is, McDougle isn't talking publicly. The U.S. Attorney's Office has accused the 22-year-old senior running back for Toledo of taking bribes from a gambler in Sterling Heights, Mich., to alter the result of football games and recruiting teammates and members of Toledo's basketball team to do likewise. McDougle was arraigned Friday in federal court in Detroit and released on $10,000 bond. He is charged with conspiring to bribe to affect the outcome of a sporting event. If he is found guilty, he faces up to five years in prison and a $250,000 fine.

U.S. Magistrate Judge Virginia Morgan advised him not to discuss the case with reporters or investigators. She set his next court date for April 20. McDougle, a prep football and basketball standout from Cleveland, practiced with the team all week during spring drills. He was suspended Saturday.

After a weekend of trying to figure out what happened, and with few answers, supporters of the Toledo football program were stunned and angry Monday. The university has closed ranks because of the case, shutting down access to other UT football players and announcing that reporters will be barred from the remaining spring football practices. UT athletes have been told not to talk with reporters. Students on the UT campus, boosters and university officials who made statements to reporters Monday shared a sense of outrage.

"It's an embarrassment," said longtime UT athletics booster James Anderson. "Obviously, I'm upset. I hate to see the university betrayed by him or anybody else."

According to an FBI affidavit filed in support of a criminal complaint, Toledo athletes began conspiring with a gambler identified only as "Gary" sometime in fall 2003 and continued the activity through early 2006.

According to the affidavit, the FBI stumbled onto the case while conducting electronic surveillance of Gary's phone, beginning in November 2005. Conversations revealed that Gary pegged McDougle to recruit Toledo football and basketball players to influence the final scores of games on which Gary and others placed wagers. In return, according to the affidavit, Gary offered McDougle and other players cash, merchandise and groceries. Additionally, Gary placed wagers with his money on behalf of players and gave them the winnings if they won.

In December 2005, McDougle asked Gary to bet $2,000 for him on the GMAC Bowl game between UT and Texas-El Paso, according to the affidavit. UT was favored by three and won by 32.

Also in December 2005, McDougle and unnamed UT football players were observed by FBI agents meeting with Gary at a Detroit restaurant and, later that evening, in the VIP area of the city's Greektown Casino, according to the affidavit.

FBI agents confronted McDougle a year later, on Dec. 14, 2006. During questioning, according to the affidavit, McDougle acknowledged his connection with Gary, who he said had given him cash, a car, a phone and other valuables in exchange for insider information and introductions to other UT athletes for bribe solicitations.

Gary's connection with McDougle began after Gary met another football player at a Toledo cellular phone business owned by a friend of Gary's and frequented by UT athletes, according to the affidavit.

The (Toledo) Blade reported Sunday that Gary is Ghazi Manni, a 50-year-old Detroit businessman. Manni told The Blade that he knew McDougle but that he was not involved in any game-fixing schemes with UT athletes. Calls seeking comment from Manni to his office at a Detroit grocery store and to his home in suburban Sterling Heights were not returned.

Other than McDougle, no UT athletes were named in the affidavit or charged in the complaint. Nor did FBI investigators identify any football or basketball games they believe were altered by athletes connected to McDougle and Gary. FBI agents said Monday that they are continuing their investigation. Dawn Clenney, an FBI spokeswoman in the Detroit office, would not say whether she expects other UT athletes to be charged eventually.

Toledo athletics director Mike O'Brien told reporters Monday that university officials will not talk with other athletes about the alleged gambling conspiracy.

"We cannot do anything until we get some type of signal from the authorities to have our own investigation," he said.

"I want to register my own deep disappointment," Jacobs said in a statement Monday.

O'Brien said he has informed Mid-American Conference officials of the criminal complaint but has not talked with the NCAA.

"I'm aware these are only allegations," he said, "but I take them seriously as a football coach. We spend a lot of time teaching these young men how to behave on and off the field. We're going to be pushing forward. I had a meeting with the players, and our focus is No. 1 on our academics and on spring football."

Basketball coach Stan Joplin, also a UT grad and former player, did not comment on the investigation and said only that he planned to meet with his players Tuesday. 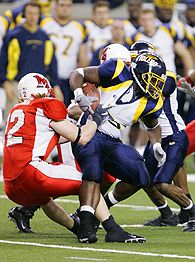 The charges against McDougle, a reserve back who starred as a sophomore but played sparingly in 2005 and last season after suffering a serious knee injury at the end of the 2004 campaign, resonated loudly on campus and throughout this northwestern Ohio city. More than 20,000 students attend UT; three-fourths of them live off-campus.

"If he was [really] involved, I can't believe he would do something like that," said Brian Lotrean, a UT senior, as he headed to class Monday afternoon. But Lotrean wasn't surprised at the allegations as a whole. "Scandals do happen. It's a part of the game."

Ted Rath, a former UT player and teammate of McDougle's for several seasons, said he is struggling to believe the allegations.

"My jaw hit the floor; I was just in total shock," he said. "It's the last thing I would have expected from any of the guys."

Like most of the football players, McDougle hung out with his own group. But Rath said he never heard of or observed any unusual activity involving McDougle or his close friends on the team. Rath said he last saw McDougle last week on campus.

"He looked great," Rath said. "There was nothing out of the ordinary, nothing that gave you a heads-up."

George J. Tanber is a contributor to ESPN.com. He can be reached at george.tanber@iscg.net.