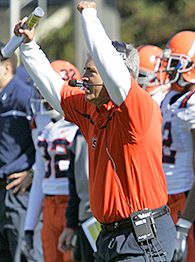 Greg Robinson is the third-year football coach at Syracuse University. He has only five wins in his first 23 games. He really, really, really needs his new quarterback to play well.

Andrew Robinson is the new Syracuse quarterback. He takes his responsibilities very seriously, which is why he plans to make Greg Robinson a happy man.

A 6-foot-3, 222-pound sophomore, Andrew Robinson was one of the coach's first big recruits at Syracuse two years ago.

"I don't look at it like his fate is tied to how I perform," Andrew said. "But some things make me a highly motivated person, and when people give me an opportunity, I don't like to let them down. He gave me a scholarship. I kind of want to do everything I can to repay him."

Hideous is way too kind a word to describe the Syracuse passing game in its first two years of attempting to execute Robinson's West Coast offense, though it actually improved last season. The Orange ranked 103rd out of 119 Division I-A teams in passing offense last season (157 yards per game) after ranking 105th out of 117 teams in 2005 (151 yards per game).

The bottom line for any offense is points, and Syracuse is one of only six schools to rank 100th or lower in scoring each of the past two seasons. The other five are Temple, Kent State, Mississippi, Duke and North Texas.