To his very last day, Eddie Robinson was always battling something. 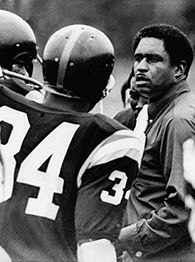 There was the institutional racism that surrounded him, the piddling football budget he and his coaching staff subsisted on at predominantly black Grambling State and, ultimately, the Alzheimer's disease that took his life at age 88.

"He'd been fighting that battle for a long time," said former Grambling quarterback and Super Bowl MVP Doug Williams. "It was one of the many he fought in his lifetime."

He was diagnosed with Alzheimer's disease shortly after he retired in 1997 and had been in and out of a nursing home during the past year.

And so ended the life of a beloved football coach who put a small school in remote northern Louisiana on the map and turned it into a virtual farm team for the NFL during a career that spanned 57 years.

Robinson built a football powerhouse with a worldwide reputation, all the while struggling to get past years of segregation and discrimination against blacks.

His success at Grambling no doubt made him the first easily recognizable black coach in any sport.