The rocket-armed transfer from Arizona State still might be the Cornhuskers' starting quarterback when the defending Big 12 North champions begin play Sept. 1 against Nevada. But the current quarterback competition has been another element in an eventful spring practice for coach Bill Callahan. 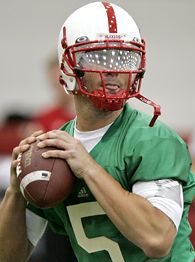 The Cornhuskers lost top cover cornerback Zack Bowman to a knee injury that will keep him out of action for up to six months. Backfield depth was depleted after 2006 leading rusher Brandon Jackson left school with a year of eligibility remaining to declare for the NFL draft. Marlon Lucky has returned after being hospitalized for several days for an undisclosed ailment before practice began. And I-back Kenny Wilson was lost for the season with a knee injury that he suffered while moving a television set.

Those factors have made for spring work that Callahan has described as "freakish." He probably has a few more words unsuitable for a family Web site under his breath.

The biggest immediate question is at quarterback. And Callahan appears more than willing to take his sweet time in determining a replacement for Zac Taylor as his starter.

Keller, a fifth-year senior, transferred to Nebraska last summer after he was beaten out for the Arizona State starting job by Rudy Carpenter. He had posted monster numbers two seasons ago before injuring his right thumb.

"These guys are all different," Callahan said. "Each of them brings something unique to the table. I think the competition is fluid at this time -- we're learning a lot about all of them and we're in no rush to move on at this time."