Jordan Steffy hasn't completed a pass in more than two seasons and has career numbers of zero touchdown passes and two interceptions.

But when Maryland opens the 2007 season on Sept. 1 against Villanova, Steffy will likely take the first snap following a strong showing in spring practice that has all but locked up the starting job. Josh Portis, a redshirt sophomore who transferred from Florida last year, will be Steffy's backup. 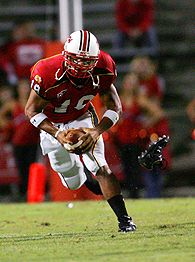 "He's played very well this spring and probably has played the best football since he's been here," Maryland coach Ralph Friedgen said of Steffy. "I still think Josh Portis is competing for the starting role.

"We won't make a decision on that until next fall. But I've been very pleased with Jordan."

As long as Steffy doesn't leave school to run for president, he will replace two-year starter Sam Hollenbach when the Terrapins kick off their season in September.

When spring practice began on March 27, Friedgen named Steffy the starter, but only by the narrowest of margins. Steffy has since widened his advantage with a series of good performances. His final test comes Saturday, when the Terrapins play their spring game.

"I'm never going to be a perfect quarterback," said Steffy, a native of Leola, Pa. "I'm never going to complete all the passes. But the thing [I've] done better this spring is that when it's bad, it doesn't completely go in the tank. If you throw two, three, four incompletions in a row, you've got to come back and hit the next one. That's what I think I've improved on this spring."