If you're talking about Big East running backs, two names spring to mind -- Ray Rice and Steve Slaton -- but a third belongs in the discussion.

What can Brown do to you? 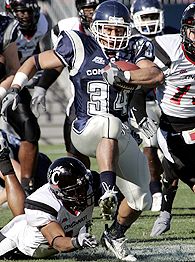 Brown didn't gain the starting job until the eighth game of the 2006 season, but proceeded to ring up 673 yards in his five starts. That's 81 more than Rutgers' Rice had in his final five games and only one fewer than West Virginia's Slaton had in his final five (not including the Gator Bowl, where Slaton saw limited duty because of an injury).

The competition wasn't all soft, either. Brown, who will be a redshirt sophomore in the fall, had 199 yards against Rutgers and 122 against Louisville. He also pounded Pitt for 205 yards on a Big East season-high 43 carries and was the only freshman named all-conference, joining Rutgers' Brian Leonard on the second-team, behind you-know-who.

Was it a fluke? Not to those who've tracked Brown's football career. They see a 5-foot-11, 215-pound former track star who can out-squat linemen and who is so determined to succeed that he had his own speed and strength coaches in high school.

They also see an athlete who is so sure of himself that he turned down offers to play defensive back at Tennessee or Nebraska because he wanted the ball in his hands.

"If Donald stays healthy, he has the ability to be up there challenging those people," said UConn coach Randy Edsall, referring to Rice and Slaton. "He's very talented."

Edsall compares Brown to a former teammate at Syracuse, Joe Morris, based on his superior lower-body strength and balance. Brown also has good speed, as evidenced by runs of 65, 53 and 47 yards last season.

"You really have to hit him to bring him down," Edsall said.

Brown didn't exactly duck the question when he was asked about Rice and Slaton, but

"l'm really not worried about them," he said. "They're two great running backs. It's evident with the numbers they're putting up. If the offensive line does a good job, maybe I'll be up there with them."

Humility is a big part of Brown's game. That became evident in speaking with Edsall and with Brown's coach at Red Bank Catholic (N.J.) High School, Frank Edgerly.

"I tell people this: I'm the father of two daughters, and this is the kind of an individual you'd like them to meet," Edgerly said. "Go to any teacher, any coach, any student here, and they will give you the same opinion."

Brown was Red Bank's first Division I-A recruit in 20 years. He led the team to a parochial title in his senior year, rushing for 2,032 yards and 27 touchdowns, including a 27-yard touchdown run on his final play.

And he made an even bigger impression off the field.

Frank Maloney, a 1954 graduate of Red Bank, was one of the team's biggest fans -- and was dying of cancer during Brown's senior year. He would pass away three weeks after the season.