STATE COLLEGE, Pa. -- Six Penn State football players, including stars Anthony Scirrotto and Justin King, turned themselves in Friday to face charges that they barged into a party and started a violent fight at an off-campus apartment earlier this month.

Each player faces at least one felony count of criminal trespass. Scirrotto, a safety, faces the most serious charges, including two other felonies -- burglary and criminal solicitation. 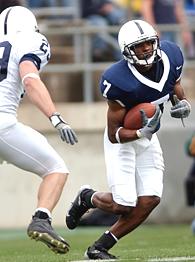 All six defendants were arraigned Friday and released on unsecured bail.

Police said Scirrotto and his girlfriend got into an altercation with three men on a street in State College and followed them to an apartment building. He called his brother and some friends to join him, but they weren't immediately let into the party, police said.

Scirrotto then called a teammate and met up with a group of players who also arrived at the party, authorities said.

A group of men, including all six players, then rushed into the apartment and a melee ensued, police said.

Some of the victims were punched, one was hit in the head with a
beer bottle and knocked unconscious, and another was punched and kicked in the face, authorities said. At least five students were struck during the fight and at least two needed treatment at a hospital, authorities said.

Linebacker Jerome Hayes, who was among the six players charged,
told police there was "chaos for five straight minutes" after the players rushed into the apartment early on April 1 to get revenge on Scirrotto's behalf.

"You got to do what you got to do," he told police, according to the arrest affidavit. "We went down to protect."

Penn State's judicial affairs office will review the allegations to determine whether the students violated the school's code of conduct, university spokesman Bill Mahon said. He could not say how long it would take to complete the review.

In a statement issued by the athletic department, coach Joe Paterno said the football staff was concerned about the accusations "and will determine the appropriate consequence for each player's status on the team when due process has transpired."

Scirrotto was the Big Ten's leader last year in interceptions and King was one of Paterno's top recruits in 2005.

Christopher Baker, a defensive tackle, was charged with two felony counts -- burglary and criminal trespass -- plus four related charges. Baker faces more serious charges because he was the only one who police were certain had thrown punches, the State College police chief said.

Lydell Sargeant, a cornerback; Tyrell Sales, a linebacker; King; and Hayes each was charged with one felony -- criminal trespass -- plus two related counts.

Ron McGlaughlin, who represents King and Hayes, called his clients "peacemakers," saying they didn't assault anyone and tried to defuse the situation. McGlaughlin said he would try to get the charges dropped.

"You go in to get people out and say 'Stop, stop this, we've got to go,' and all of a sudden you are facing criminal charges," he said. "Just because you're inside and there is a bunch of pushing and shoving doesn't mean you're a part of any of that."

Stacy Parks Miller, an attorney for Sales, said: "Right now, everything is just an accusation." Sargeant's attorney, Karen Muir, said only that she and her client planned to discuss the details of the case.

Scirrotto's attorney did not immediately return a call.

Two other men, neither of whom is an athlete, were charged with
less serious offenses stemming from Scirrotto's initial argument on the street, which happened late on March 31, police said.

Most of the people involved in the apartment fight had been drinking, said the police chief, Thomas R. King. Centre County District Attorney Michael Madeira said there were dozens of people in a hallway outside the apartment, but that authorities decided not to charge anyone who didn't go inside.