Given up for dead three years ago, the top-heavy Big East is fresh off a 5-0 bowl season and primed to spend plenty of time in the national spotlight again this season.

That is because three teams that finished in the top 12 -- Louisville, Rutgers and West Virginia -- will go into the season with realistic national title hopes based on high-end talent and highly manageable schedules. 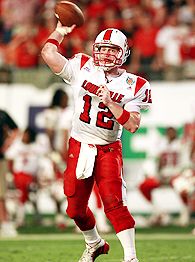 None of the three plays a nonconference game against a team that was ranked at the end of last season.

The Cardinals sustained heavy losses on defense but have plenty of young talent ready to step in and could easily be 9-0 going into their final three games -- at West Virginia and South Florida and at home against Rutgers.

Rice led the Big East in rushing last season with 1,794 yards and has helped spark a big-time revival at Rutgers. The Scarlet Knights are coming off successive bowl games for the first time in school history but will need big years from junior quarterback Mike Teel and emerging star receiver Kenny Britt if they are to win the conference.

White and Slaton combined for 34 rushing touchdowns last season and figure to rack up huge numbers again. The question is, can they overcome potential problems on the Mountaineers' defense? 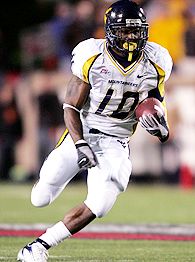 West Virginia gave up 32 points per game the second half of the season. Expect to see coach Rich Rodriguez add some new wrinkles -- and some new players -- to that unit this season.

USF delivered a potential program-changing victory against West Virginia late last season and has looked right at home in the Big East since it joined in 2005. In fact, it has beaten every other member of the conference in its two years.

"Now, we have to put it together in the same year," says sophomore quarterback Matt Grothe.

After USF, there appears to be a sharp drop-off. The conference could use a revival from old-school members Pitt and Syracuse, but this likely isn't the year. Syracuse plays a brutal early schedule, and Pitt will be too inexperienced.

Cincinnati will attempt to recapture last year's magic (4-3 in the conference) under new coach Brian Kelly and his wide-open offense The hope is that Wake Forest transfer Ben Mauk will upgrade the quarterback play while the defense continues to shine despite the loss of defensive-minded head coach Mark Dantonio.

Connecticut, after an impressive conference debut in 2004, has fallen back the past two seasons. The Huskies are looking for big things from tailback Donald Brown II and possible new quarterback Tyler Lorenzen, a junior-college transfer who is battling redshirt sophomore Dennis Brown for the job.

Here's a look ahead to the Big East season:

Toughest schedule: While the rest of the conference opens against the likes of Buffalo, Elon, Eastern Michigan, Murray State and Southeast Missouri State, Syracuse opens against a Pac-10 school (Washington) and follows with two Big Ten teams (at Iowa, vs. Illinois). The Orange then begin conference play at Louisville, and, after a visit to Miami (Ohio), play host to West Virginia and Rutgers. That's no way to revive a program. Pitt is the only team in the conference to play road games against the big three -- West Virginia, Louisville and Rutgers -- and also must visit Michigan State and Virginia.

Easiest schedule: Rutgers plays eight of 12 games at home, one more home game than any team in the conference. That includes the first five -- against Buffalo, Navy, Norfolk State, Maryland and Cincinnati. If the Scarlet Knights survive West Virginia on Oct. 27, they could be unbeaten going into the season finale Nov. 29 at Louisville.

Offensive player of the year: Brian Brohm, quarterback, Louisville. Pick a name -- Steve Slaton, Brohm, Pat White or Ray Rice -- out of a hat, and you can't go wrong. Brohm might not put up the biggest numbers, but if he can lead his team to a second straight conference title, he'll deserve the award.

Defensive player of the year: Eric Wicks, free safety, West Virginia. Wicks was one of only two unanimous picks on the All-Big East first team last season, along with Louisville defensive tackle Amobi Okoye, who has moved on to the NFL. Wicks had 11 tackles for loss, seven sacks and three interceptions from his strong safety position as a junior. He should have more room to roam and make plays at free safety.

Breakout player of the year: Mike Ford, running back, USF. After rushing for a state-record 2,836 yards and 37 touchdowns his senior year at Sarasota (Fla.) High in 2004, the 6-foot-2, 225-pound Ford committed to Alabama, then de-committed after a year at Hargrave Military Academy and wound up at USF, where he looked impressive in spring ball.

Comeback player of the year: Taj Smith, wide receiver, Syracuse. A fractured clavicle ruined Smith's 2006 season in the fourth game. The junior college transfer already had established himself as a big-play guy, with 227 yards receiving and three touchdowns. Expect Smith to return to top form.

Most dynamic playmaker: Pat White, quarterback, West Virginia. He had runs of 69, 64 and 53 yards and completions of 67, 60 and 57 yards last season. There was a reason the Anaheim Angels drafted him in the fourth round three years ago to play center field. He's a ridiculously gifted athlete.

Coach on the hot seat: Greg Robinson, Syracuse. After consecutive last-place finishes and a conference record of 1-13 in his first two years, Robinson needs to find a way to avoid the cellar this time around.

Team that may surprise: USF. The Bulls showed their mettle in an upset win at Morgantown late last season. They have an electric quarterback (Matt Grothe), a rapidly improving talent base and a potentially dynamic running back in Mike Ford. Home games against West Virginia and Louisville could determine their fate.

Team that may disappoint: West Virginia. A qualifier here: The Mountaineers will disappoint only those who expect them to run the table and get invited to the national championship game. They're good enough to go, say, 10-2, but big questions on defense will have to be answered if they are to secure a BCS bowl bid. Also, it might be a bit much to expect Cincinnati to win eight games and go 4-3 in the conference again.

Big East champion: Louisville. Nobody would be surprised if Rutgers or West Virginia claimed the crown. The league title might come down to the Cardinals' season finale, Nov. 29 against visiting Rutgers. Louisville's lethal passing game, featuring Brohm and receivers Mario Urrutia and Harry Douglas, will run roughshod through the conference.