The Pac-10 was arguably the nation's best conference in 2000, when three teams finished ranked in the final top seven of the AP poll. In 2002, it may have been the nation's deepest conference with eight teams boasting winning records and two playing in BCS bowl games.

The other five seasons of the 21st century? Nah. Read: Mostly fair to middling. 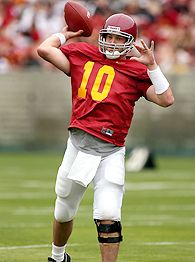 Don't be shocked, however, if 2007 produces a blend of these banner seasons. As spring practices conclude, the Pac-10 appears as deep as it has been in years with a number of teams owning legitimate shots at the top half of the national rankings.

"I think the Pac-10 is as wide open as it has been," Oregon State coach Mike Riley said.

Including specialists, teams welcomed back an average of 16.3 starters -- 1.3 more than last year -- and all 10 are mostly set at quarterback, typically the make-or-break position in the pass-happy conference.

At the top, of course, is USC. With 18 starters back from a team that dominated Michigan in the Rose Bowl, it's inconceivable that the Trojans won't be the consensus preseason No. 1.

But the conference won't just be nine satellites jealously orbiting a glorious star, which has been the popular perception since the Trojans began a streak of five consecutive top-four AP finishes.
At least seven teams could make a reasonable case they are bowl worthy. Of the bottom three -- Washington State, Washington and Stanford -- only the Cardinal appear completely hapless.

Pac-10 success generally starts at quarterback, where little intrigue remains to be analyzed in advance of fall camp.

USC quarterback John David Booty is a leading Heisman Trophy candidate. If he falters, California's Nate Longshore could become one.

Oregon State is the only team enmeshed in a quarterback competition between two players with no starting experience, though touted sophomore Sean Canfield appears to hold an edge over scrappy sophomore Lyle Moevao. 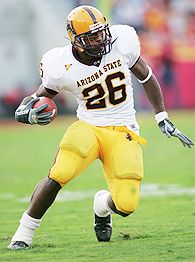 The running games also should be strong. Eight of the conference's top 10 rushers will be back. Every team will have at least one running back who eclipsed 100 yards in a game last season. USC, Arizona, Stanford and Washington State are the only teams with questions at tailback, though the Trojans' issue is having just one ball to divide between seven first- or second-year backs who earned Parade prep All-American honors, including three who signed this past winter.

It's possible many of these talent-laden offenses could look different this season. Not only did Stanford (Harbaugh) and Arizona State (Dennis Erickson) hire new head coaches, four other schools brought in new offensive coordinators (UCLA, Arizona, California and Oregon). At Cal, Jeff Tedford will resume play-calling duties after spread guru Mike Dunbar bolted for Minnesota after one season. USC's 2006 offensive coordinator, Lane Kiffin, became the Oakland Raiders' head coach, but assistant head coach Steve Sarkisian was ultimately in charge of the offense, so not much will change.

The source of the best news, however, might be surprising: defense. Yes, defense in the Pac-10! USC, UCLA and Arizona -- the conference's top three scoring defenses in 2006 -- each returns 10 starters. All three crews could be among the better units in the nation. Honest.

All of this figures to create an offseason of high expectations across the West Coast. Does any team have the talent to knock USC out of the top spot for the first time since 2001? Probably not. But no one crowns conference or national champions in May.

Toughest schedule: Washington might be a fairly respectable team this year and still not post a winning record for a fifth consecutive season. Not only is the Pac-10 as strong and deep as it has been in years, but the Huskies also face a brutal nonconference schedule: at Syracuse and home to Boise State and Ohio State. That's a 2,500-mile road trip to play inside an unusual domed stadium and against two teams that finished in the top five and combined for one defeat last year. The Huskies close the season on the road against Heisman candidate Colt Brennan and Hawaii. The good news? Nearly all the marquee games, including visits from USC, California and rival Washington State, are in Husky Stadium.

Offensive player of the year: There are lots of choices here, but the safe bet is USC quarterback John David Booty, who figures to be a leading Heisman Trophy candidate if the Trojans live up to their preseason hype. Caveat: His receivers are talented but untested, so matching last year's numbers -- compiled while throwing to a pair of second-round NFL draft choices -- is not a sure thing.

Defensive player of the year: Let's go out on a limb and not tap one of the six or seven Trojans who could win this honor  how about Arizona cornerback Antoine Cason, whom coach Mike Stoops called the nation's best cover corner. Cason owns 10 career interceptions and plays on an experienced defense that returns 10 starters.

Newcomer of the year: Ladies and gentlemen, Washington quarterback Jake Locker, the man upon whom the long-delayed resurgence of Huskies football hangs. Locker, a redshirt freshman, is being touted as the second coming of Marques Tuiasosopo, only with more speed, more size and a bigger arm. And, most important: He's a dynamic, charismatic leader, which the beleaguered program hasn't had since Rick Neuheisel's demise. Coach Tyrone Willingham proclaimed him the starter before spring practices began. Caveat No. 2: Senior Carl Bonnell, whose career has been marked by fits and starts, clearly outplayed Locker during spring practices.

Comeback player of the year: Jeff Byers was everybody's prep All-American in 2003 when he signed with USC. A first-team USA Today and Parade All-American, he also was named Gatorade Player of the Year -- as an offensive lineman! He started four games as a true freshman in 2004 and appeared poised to vie for All-American honors as a sophomore. Then he suffered a hip injury and missed the 2005 season. Then he suffered a back injury and missed the 2006 season. Was he done? Nope, he survived and then thrived this spring, emerging as the starting guard who also could play center.

Breakout player of the year: After a standout performance from junior receiver Brandon Gibson in the spring game, Washington State fans aren't so worried about the departure of Jason Hill to the NFL draft. With three-year starting quarterback Alex Brink, four returning starters on the line and an uncertain pecking order at tailback, the Cougars figure to throw early and often. Gibson will be the breakout playmaker alongside known quantity Michael Bumpus.

Most overrated player: This space has touted Oregon tailback Jonathan Stewart since he signed with the Ducks three years ago. Stewart may be the nation's most physically talented running back, a rare combination of size (5-foot-11, 234 pounds) and speed (sub-4.4 40-yard dash). The sight test? Dude looks like he was cut out of marble. But durability issues combined with middling instincts have prevented him from breaking out. He's become a good back, just not a great one. If he gives the Ducks 20 carries a game over 12 games, he should rush for over 1,500 yards. The operative word being "if."

Most underrated player: This honor is typically reserved for Oregon State tailback Yvenson Bernard, but Bernard is so often touted as underrated, despite owning 2,648 career rushing yards and 27 touchdowns, that it's become a reflexive cliché. So, being the crazy devils that we are, we're instead tapping Arizona State's junior tailback Ryan Torain, who quietly rushed for 1,229 yards and scored 10 touchdowns last year. With experience on the offensive line offsetting questions at receiver and uncertainty over the trajectory of inconsistent quarterback Rudy Carpenter's career, Torain may become the centerpiece of the Sun Devils offense.

Coach on the hot seat: Washington State's Bill Doba is one of the warmest, most genuine men in Division I-A college coaching. But if the Cougars don't qualify for a bowl game this season, he may step aside -- or be pushed aside. Runner-up for this dubious honor is Arizona's Mike Stoops. The Wildcats faithful are getting restless with the deliberate pace of the program's improvement. With Stoops welcoming back 18 starters for his fourth season, fans expect a bowl berth.

Team that may surprise: Dennis Erickson takes over an experienced Arizona State team with plenty of talent. If the Sun Devils can just play respectable defense, there's no reason they can't post a winning record and earn a bowl berth. And, perhaps, knock off some big dogs along the way with that ole Erickson magic.

Team that may disappoint: California coach Jeff Tedford has laid very few eggs in his five years in Berkeley, quickly transforming a moribund program into a budding national power. Oh, the Bears went belly-up in the 2004 Holiday Bowl against an inferior Texas Tech team, but other than that things have been mostly smooth. At least until that 35-18 humiliation at Tennessee that made Cal look ill-prepared for the big time and set tongues wagging on Pac-10 mediocrity. The Volunteers visit Strawberry Canyon this fall. If Cal wins, buckle up for a banner season. If it loses, things could become unsteady. A potential Achilles' heel: Six marquee starters from last year's underachieving defense need to be replaced.

Pac-10 champion: USC, with 18 starters back from a team that drubbed Michigan in the Rose Bowl and then signed a fourth consecutive top-rated recruiting class, is about even money to capture its third national championship since 2003.