There figures to be no more highly charged atmosphere in college football next fall than when Virginia Tech opens the 2007 season on Sept. 1 in Blacksburg against East Carolina. 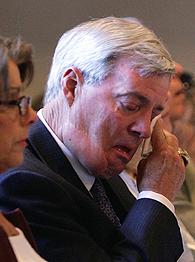 With 16 returning starters making the Hokies a strong contender for an ACC title, Virginia Tech's passionate fans have been anticipating the '07 season since 2006 ended with a thud during a 31-24 loss to Georgia in the Chick-fil-A Bowl in Atlanta.

But that's only a small part of the story.

As with the Yankees after 9/11 or the New Orleans Saints following Hurricane Katrina, coach Frank Beamer believes the Hokies' season opener will serve as a unifying and uplifting connection for a community that remains in mourning following the on-campus massacre of 32 students and faculty by a lone gunman on April 16.

"I think when we open up against East Carolina at Lane Stadium next fall there will be a togetherness in that stadium that we've never seen before," Beamer said. "There's been a lot of exciting moments and a lot of great fan support.  That's helped us win a lot of games in that stadium, but I'll just bet if I know Hokie people that it will be tighter than ever next fall."

Beamer canceled the final week of spring practice and the spring game on April 21 following the shootings. Instead of running practices and watching film, Beamer spent most of his time visiting hospitals, attending a memorial and meeting with families of the victims.

Although he didn't have any second thoughts about shutting down spring practice, Beamer admitted that, in strict football terms, canceling the final three workouts and spring game "sets us back."

That's because, despite the large group of returning starters, the Hokies entered spring practice with questions at quarterback, the offensive line, special teams and elsewhere.

While not all of those uncertainties were answered satisfactorily by the time spring practice came to its premature end, Sean Glennon did quiet any doubts regarding his status as Virginia Tech's No. 1 quarterback.

Glennon started every game last season and played reasonably well until a nightmarish meltdown in the bowl game brought his sophomore season to a disappointing end.

Glennon committed four second-half turnovers -- three interceptions and a fumble -- as Virginia Tech blew a 21-3 halftime lead to the Bulldogs.

The performance earned Glennon the wrath of Hokies fans, some of whom sent nasty e-mails saying he didn't deserve to be Virginia Tech's starting quarterback.

For a couple of days after the bowl game, Glennon admits he went into a "funk" after being ambushed by the fans' reaction. 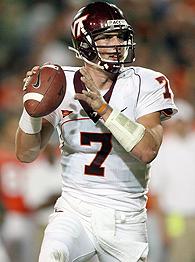 "I tried not to take it personally," said Glennon, a native of Centreville, Va. "I knew what I was getting myself into when I came here. I knew that people were going to like me a lot when we were winning games and I was playing well and they probably weren't going to like me too much if we were losing and I wasn't playing well.

"I understand that being in a big program like this, fans expect a lot and if you make mistakes, especially in a bowl game, a lot of people are going to know about it."

Glennon said some people look at the bowl game and "that's all they kind of remember. But we all know that I did some other things here last season besides have that bad day."

Certainly, Glennon had his moments. Against ACC champion Wake Forest, Glennon completed 14 of 21 passes for 252 yards, two touchdowns and no turnovers in a 27-6 victory. He also led the Hokies on a six-game win streak to close the regular season before seeing it snapped in the bowl game.

Before spring practice began, Beamer declared that "Glennon is our quarterback," cutting short any discussion that backup Ike Whitaker might have a realistic shot at the job.

"You know, we won 10 football games with Sean," Beamer pointed out.

The one area Beamer said Glennon must improve in 2007 is decision-making. Glennon threw 11 interceptions last season and concurs with his coach that he struggled with "knowing when to pull it down, knowing when to throw it away and knowing when I can squeeze it in there and make a pass."

In order to combat that problem, Beamer chose to make Virginia Tech quarterbacks "live" during spring contact drills and scrimmages.

"I think I can get a lot better," Glennon said. "I don't think anybody has seen exactly how good I can be."

If Glennon steps up his game, the Hokies' offense should be in good shape. Tailback Branden Ore finished second in the ACC last season in rushing (94.8 ypg) and touchdowns (16). Eddie Royal, Josh Morgan and Justin Harper aren't big names, but make up an effective trio of receivers.

With eight starters returning from a defensive unit that ranked first nationally last season, Virginia Tech is as good a choice as any to win the conference championship.

Whether that happens could depend on the 6-foot-4, 221-pound Glennon.

"From a confidence level and how I feel about myself, it's a big improvement from last [season]," Glennon said. "Last year, I was trying to get better at everything. Now, I have a season under my belt. I know what I'm good at and what I need to work on. I've seen a lot of defenses so my football smarts have gone up a little bit. I see things better. The game is slowing down. So I'd say I've taken a big step forward."