Indiana athletic director Rick Greenspan said Monday that he had hoped ailing football coach Terry Hoeppner would be back to work by now and he's getting worried about his ability to return to the job. 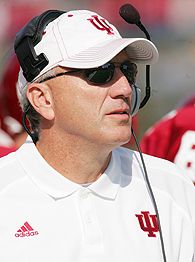 "The bottom line right now is that Hep is not back at work," Greenspan told the Indianapolis Star for Tuesday's editions. "He has been out for a couple of months. Obviously we're concerned, and the longer he is out, the more concerned we get about his return or his ability to return."

"We've said this and we'll continue to say it, we're not standing still. We had what I thought was a good, strong, solid and healthy spring football season," Greenspan told the newspaper.

"We had a really good semester academically. We've got a lot of kids on campus either at summer school, or working or whatever, getting stronger. So, we're certainly by no means on a treadmill, but Terry has been both a face and a leader of this team. And so, in terms of his personal visibility and what that means to us, yeah, we'd love to have him out there."

The athletic department released a statement from Hoeppner in May, with the coach saying he hoped to return to the job.

"I continue to receive medical treatment and remain inspired to
return to coaching when my health permits," Hoeppner said. "I
love Indiana University and Indiana football and will make
decisions in the best interest of the program, as I have always
attempted to do."

The statement gave no details about Hoeppner's treatment, health or when
he might rejoin the team.

Hoeppner's last major public appearance was in late February when he
spoke during an NCAA luncheon in Indianapolis. He also attended a
news conference earlier that month to announce Indiana's newest
recruits, although the assistant coaches answered most of the
questions and provided most of the details.

Hoeppner left Miami of Ohio in December 2004 to return to
Indiana, his home state, and take over a Hoosiers program that last
went to a bowl game in 1993.

A year later, he had a tumor removed from his right temple and
last September he had a second operation on the right side of his
head. He then left the Hoosiers for two weeks but watched both games
from the press box before rejoining the team. Hoeppner later
implied follow-up tests showed no recurrence of the tumor, but that
doctors had removed only scar tissue.

Hoeppner is 9-14 in his two seasons at Indiana, and he has
restored enthusiasm in the program by reaching out to students
and fans. In December, Hoeppner signed a two-year contract
extension that would keep him in Bloomington through June 2012.