TCU Horned Frogs standout defensive end Tommy Blake returned to campus for the start of classes on Monday and will return to practice on Tuesday, team spokesman Mark Cohen said. 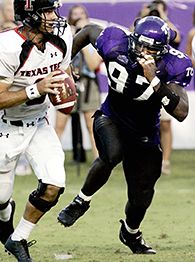 Blake, a two-time All-Mountain West Conference pick and top NFL
prospect, left the team after the first of two practices Tuesday to attend to a "personal matter."

At least a half-dozen NFL scouts watched the
22-year-old senior practice in the days before his departure.

"Maybe it was a little bit of the pressure of everything,"
Coach Gary Patterson said on Friday. "A lot of things go through a kid's mind. We will
give him time to do what he needs to do. We know what he can do on
the field."

Patterson said he has been in contact with Blake's grandmother,
who raised the defensive end.

Patterson said Blake got rid of his cell phone because of
frequent calls and messages from friends and would-be agents since
the spring.

Blake's absence was first reported Friday by the Fort Worth
Star-Telegram. He has missed five practices.

After the intrasquad scrimmage Saturday, the Horned Frogs don't
have another practice scheduled until Tuesday, a day after classes
begin at TCU.

Patterson said Blake was having "great practices" before he
left. In an intrasquad game last week, the coach said Blake played
23 snaps and made 10 plays in that stretch -- including sacks,
tackles and a forced fumble on a sideline option going to the
opposite side from where he lined up.

"He came [to camp] in great shape, ready to go," Patterson
said.

The 6-foot-3, 252-pound Blake led the Mountain West with seven
sacks and 16½ tackles for losses last season. He was the defensive
MVP in the Poinsettia Bowl, when he had two sacks in the Frogs'
37-7 victory over Northern Illinois.

As a sophomore in 2005, Blake had seven sacks -- second in the
MWC behind teammate Chase Ortiz -- and his 13½ tackles for losses
trailed only Ortiz for the conference lead.

Blake and Ortiz, also a two-time all-MWC player, are among nine
returning starters on a defense that ranked in the top three
nationally last season in rushing defense, total defense and
scoring defense while TCU won 11 games for the third time in four
seasons.

Information from ESPN college football reporter Joe Schad and The Associated Press was used in this report.