LINCOLN, Neb. -- Nebraska and Bill Callahan have agreed on a three-year contract extension that will take the Cornhuskers football coach through the 2011 season. 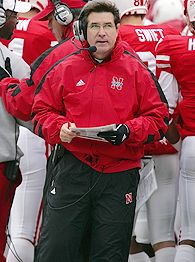 Callahan is 23-15 in four seasons with the Cornhuskers, winning
the Big 12 North championship last year.

"In terms of what he's done for the program, he has certainly
met or exceeded my expectations at this juncture," athletic
director Steve Pederson said Tuesday.

The 51-year-old Callahan signed a six-year contract paying him
$1.5 million a season when he was hired in January 2004.

Under the new contract, Callahan can earn $425,000 in bonuses
annually for winning division, conference and national
championships, Pederson said Tuesday.

"I have said on numerous occasions that we want coach Callahan
to be the coach at Nebraska for a long time," Pederson said.
"This commitment to Bill and his staff is a result of our belief
that all the right ingredients are in place for long-term success.
Bill has assembled a top-notch staff, and they are recruiting
outstanding young men. He also has set a very high standard for
discipline, integrity and work ethic that makes us proud as
Nebraskans."

No. 20 Nebraska opened its season Saturday with a 52-10 victory over Nevada. The Huskers play at Wake Forest this Saturday, a prelude to their much-anticipated matchup against top-ranked USC on Sept. 15 in Lincoln.

Callahan said he doesn't worry about where his compensation ranks.

"I never got into coaching for all these things," he said. "I
coach because I enjoy coaching. I've never looked at coaching as
about money, about the next job. I always did the best job I could
in the situation I was in, and things always worked out better for
myself and my family."

"It reflects greatly on our football staff," Callahan said.
"I wanted to be here, and I am committed to being at Nebraska."

Perlman said he's as comfortable with Callahan today as he was
the day Callahan was hired.

"We've always said it's not exclusively a question of wins and
losses, but the trend is moving in the right direction," Perlman said.

Perlman said the new contract should help give prospective
recruits peace of mind about Callahan's future.

"That is a factor that plays into how you deal with a head
coach, but we didn't do it to just protect recruiting," Perlman
said. "We did it because we have confidence in Bill and the
direction of the program."

Callahan coached the Oakland Raiders to the Super Bowl after the
2002 season. He was fired by the Raiders in 2003 and was hired by
Pederson to replace Frank Solich.