At least seven Fridays for each of the past four football seasons, Alvin Flynn and his wife Ruth have dutifully climbed in the family vehicle and driven five hours from their home in Tyler, Texas to Baton Rouge, La.

Subsequently, there hasn't been much to discuss on those Sunday afternoon trips back to Tyler.

"We've spent a lot of money watching Matt hold footballs," Alvin said with a laugh. "We kid all the time, 'That was one of the greatest holds we've ever seen.'"

But this weekend's trip will be different for the Flynns. This weekend, as Alvin said, will have a "different air of excitement and expectations than we've had before."

Because finally, the most patient man in college football, LSU fifth-year senior quarterback Matt Flynn, gets to start the first home game of his career when the No. 2 Tigers face No. 9 Virginia Tech on Saturday (ESPN, 9:15 p.m. ET).

About 14 Flynn family members will be on hand. Also, somewhere up above the shining lights of Tiger Stadium, Matt's late grandfather Mike, who died about 11 years ago, will be laughing and shaking his head.

It was Grandpa Flynn who had his grandson pegged perfectly. He nicknamed little 5-year-old Matt "Ironhead" -- because, as Alvin said, "Matt was one of those hardheaded little kids that you couldn't tell he couldn't do something, because he'd show you he could do it." 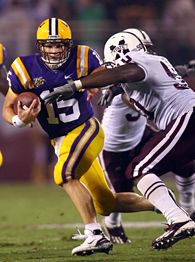 Whether it's his stubbornness or loyalty, the latter of which is in short supply these days in college football, Flynn sat four years (one as a redshirt) at LSU, most of them behind JaMarcus Russell, selected No. 1 overall in April's NFL draft by the Oakland Raiders.

"It was tough to sit for so long and not play," Flynn said. "But I knew something good would happen if I stayed patient. I love this school. I love everything about it. I just wanted the opportunity to lead this team."

There's not a more admired man on a team chock-full of NFL talent than Flynn.

"Matt has always competed extremely well," LSU coach Les Miles said. "Our team has a great respect for him and admires how he's competed. As this year approached, everyone on this team was looking forward to him being our quarterback."

Flynn's unselfish attitude has had a profound effect on his teammates.

"Before I committed to LSU, I looked at Matt and I thought, 'This guy can play for anybody in the country, and why is he here as a backup?'" LSU star receiver Early Doucet said. "It just showed me what he thought of the program, his loyalty to the team.

"Matt, out of all the guys on the team, maybe is the only person who can handle the situation of waiting so long to get a chance to start."

Alabama coach Nick Saban, who recruited Flynn in 2003 as LSU's coach, said he isn't surprised Flynn stuck it out.

"Matt Flynn is a great person, exactly what you'd want at any place you coach to lead your team," Saban said. "He's a great example of perseverance. Every time he got a chance to play as a backup, he did an outstanding job, and he'll do the same as a starter."

It's not easy stepping in for a No. 1 overall draft choice, as Flynn is doing. One of the last times it happened in the SEC was in 1998 when little-used junior quarterback Tee Martin, ironically from the same Mobile, Ala. high school as Russell (Williamson H.S.), took over as Tennessee's starting quarterback for the graduated Peyton Manning.