Anyone who saw Middle Tennessee tear through Louisville's defense Thursday has to wonder if Kentucky running back Maurice Grinter isn't right.

"They got exposed," Grinter told the Lexington Herald-Leader.

Those are fightin' words, especially for a guy who gained minus-1 yard against Kent State two days later and saw his team's defense get exposed, too, as it surrendered 324 rushing yards.

But the point is well-taken (if you're not from Louisville, anyway) and perhaps can be extended to this: It was hard to imagine No. 9 Louisville playing for a national championship -- or even a Big East championship -- as you watched Middle Tennessee traverse Papa John's Cardinal Stadium like an Olympic track team.

Three of their scoring "drives" lasted fewer than 45 seconds.

It's worth noting, though, that Louisville still won the game by 16 points (58-42) and its defense has a big chance to redeem itself Saturday at Commonwealth Stadium against Kentucky (ESPN Classic, 7:30 p.m. ET).

It's also true that if anybody is going to beat Louisville (2-0) this season, it will have to outscore a video-game offense that is posting 65.5 points and 689 yards per game and is run by the potential No. 1 pick in next year's NFL draft, quarterback Brian Brohm.

But back to the Cardinals' defense, which was supposed to be a team strength, bolstered by additions such as linebacker Willie Williams and cornerback Woodny Turenne, who was rated by various scouting services as the top junior college prospect in the country last season.

The defense beat up that powerful offense in the spring game and was deemed the fastest of coordinator Mike Cassity's four-year tenure, despite significant personnel losses.

The biggest of those was tackle Amobi Okoye, the 10th pick in the NFL draft. His dominating presence along the line and in the locker room is missed greatly.

Cassity has simplified the defense in preparation for the Wildcats (2-0), who have produced 1,052 yards and 106 points in victories over Eastern Kentucky and Kent State.

"We probably need to reduce the calls and give the players what they can handle," said Cassity, a 1976 Kentucky grad. "The last three years, we've had the same package, but if you overwhelm a young man with so many calls, he's not going to play as fast, and that's been our signature here."

To compound the Cardinals' challenge, starting safety Latarrius Thomas sustained a torn ACL on Thursday and is lost for the season. He was the only starter back from last year's secondary.

Louisville linebacker Malik Jackson, the team's leading tackler, said players were so upset with their performances, they arrived at the video room extra early Friday morning.

The team always watches game tape the next day, but "this was more of an urgent situation, to come in and fix our errors," Jackson said. "We want redemption, to show everybody we really can do it."

Watching that film must have been as enjoyable as sitting through "The Exorcism of Emily Rose," but Jackson deemed it a valuable experience. The Cardinals believe their mistakes are correctable and that talent isn't the issue.

The coaches also are convinced that the breakdowns were easily explained, even if they did occur against a team that sported a makeshift offensive line and had struggled to score 14 points a week earlier against Florida Atlantic.

Personnel changes are possible, but Cassity believes the key to a fast turnaround is "resilience."

"It's getting back to basics," he said. "Toughness, discipline, running to the football. That's what I've been preaching since I got here."

Cassity believes this unit can be as good as his other three, all of which finished in the nation's top 40 in total defense. Last year's group was 17th in scoring defense and second in sacks (45). 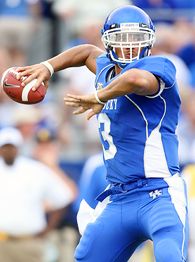 This season's group has only one sack in two games, tied for 104th in the country.

One element in question is a star presence on the defensive line. Okoye fulfilled that role in 2006, Elvis Dumervil in 2005.

New coach Steve Kragthorpe was asked if he still believes Louisville has a championship-caliber defense.

"I think we do," he said, "but we've got a lot of guys who have not yet played a lot of football here. You know, we lost seven starters. Some of our guys are not playing as well right now as I need them to play, and they know that. And that's the encouraging thing to me. Our guys are more upset than I am."

Louisville has won the past four meetings, last season's by a score of 59-28. The Cardinals refuse to respond publicly to Kentucky's barbs, which included more from Grinter, who said, "Are they really getting all of the hype they're getting with a defense like this?"

"Everybody has their own opinion," Jackson said. "The people in our huddle, that's who we worry about."

Another Kentucky running back, Alfonso Smith, told the Louisville Courier-Journal, "They might have been looking ahead [against Middle Tennessee], but I don't know if they are pointing to this game like we are. They are actually maybe looking past us, too."

There's little chance of that. After its performance Thursday, Louisville shouldn't be looking past anyone, least of all a bitter in-state rival 75 miles down the road.

There would be no defense for that.