Even if his coach is trying to downplay the approaching game, Nebraska guard Matt Slauson is saying what almost everybody else in Nebraska is thinking about in anticipation of No. 1 USC's visit on Saturday (ABC, 8 p.m. ET).

The Huskers have been out of the national spotlight for the past several seasons. Nebraska hasn't produced a 10-win season since 2003 and hasn't been in the national championship picture since before then. 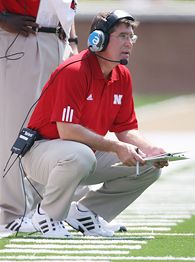 All of that helps to make Saturday's game with the Trojans one of the most eagerly anticipated in school history.

"It's tough not to be extra juiced because it is the No. 1 team," Slauson told the Lincoln Journal-Star. "It's a big game."

Nebraska coach Bill Callahan has tried to make the Trojans seem like anybody else on the Cornhuskers' schedule.

"You don't get too high and don't get too low in terms of your approach," Callahan said. "It doesn't really matter who you are playing. You focus on what you have to get done and accomplish. The opponent is the opponent. We have great respect for whoever comes in here."

But the presence of ESPN's "College GameDay" in Lincoln for the first time in six years adds a little more luster for a program that has been out of the public eye for the past few years.

It wasn't always that way.

When the Big 12 was formed, and before Texas coach Mack Brown and Oklahoma coach Bob Stoops turned the conference into their own playground, Nebraska was arguably the nation's best football program. The Blackshirt defense was the scourge of opponents everywhere. Coach Tom Osborne won a share of three national championships during a six-year period. Memorial Stadium was the epicenter of college football.

Those days when Lawrence Phillips, Jason Peter, Tommie Frazier, Grant Wistrom and Ahman Green dominated opponents seem so long ago. The Cornhuskers haven't won 10 games in a season since coach Frank Solich's last season and have struggled to find a national identity under Callahan.

Saturday's game represents the biggest challenge for Callahan, who has posted a 3-6 record against ranked opponents and has not beaten a top-10 foe in five tries. But an upset could represent the national coming-out party for the former Oakland Raiders coach.

"I think it's a great competitive challenge for our football team," Callahan said. "We've been in big games before. We've played the Michigans and the Auburns and the Oklahomas and the Texases. And this is the next big game on our schedule.  They are all big."

But this one might be a little bigger. Hotels have been sold out for months. The game will be ABC's featured Saturday night game. Nebraska superfan Larry the Cable Guy will be there. Maybe even Will Ferrell, too.

It will be the first time a No. 1 team has visited Lincoln since 1978. And Callahan, who received a two-year contract extension last week, desperately needs a victory to gain some validation after a 24-15 start to his Nebraska coaching career.

Nebraska wide receiver Maurice Purify sees the Trojans' visit as a matter of survival -- whether the program builds its national credibility or not.

"They have to come into our house and beat us at home," Purify said. "You don't want nobody busting down your door and beating you up."

Saturday's game will be similarly big for Nebraska quarterback Sam Keller, who will be facing some familiar foes when the Trojans visit. Keller nearly engineered an upset victory by Arizona State in his most recent game against USC in 2005.

In the first half of that game, Keller appeared to have the answer; Arizona State had a 21-3 halftime lead against the Trojans. But he was intercepted four times in the second half as USC rallied for a 38-28 victory.

"I might have thought of myself as somewhat bulletproof," said Keller, who had the reputation of a gunslinger in his days at Arizona State. "But when you look at them, you can't really do that. You can't take unnecessary chances against that defense, because they are so fast and so good."

His career with the Sun Devils was turned upside down the following week after he tore thumb ligaments. Keller lost the job as Arizona State's starter in camp the following season and ended up on the Nebraska scout team only a few weeks later after he transferred.

"I don't look at this as redemption at all," Keller said. "It's such a distant, foregone memory that thinking about that game doesn't come up anymore." 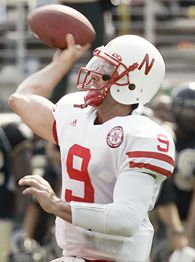 But he does bring a history against the Trojans that could help his team in only his third start for the Cornhuskers. And he also gleaned some information from Oregon State's offensive success in the Beavers' upset last season versus the Trojans.

That strategy would be a change compared to how the Cornhuskers attacked the Trojans last season in Los Angeles. They rarely threw the ball downfield, attempting only 17 passes.

Callahan was determined to pound the Trojans' interior strength last season. It didn't work as the Cornhuskers produced a season-low 211 yards in a 28-10 loss.

Cornhuskers fans criticized Callahan for playing too conservatively in that game. Slauson told reporters earlier this week that he thought the Cornhuskers came into the game "scared" because of USC's reputation.

But he assured the Lincoln newspaper that wouldn't be the case this season.

"After playing Auburn and playing Texas, we can play with whoever comes to us," Slauson said. "It's all about us now. We have to do what we have to do, and the other team isn't a factor for us."

USC coach Pete Carroll and his team have had success in hostile areas, winning at Auburn, Arkansas, Notre Dame, Colorado, BYU, Hawaii and against Virginia Tech in Landover, Md., since 2002. So a trip to Lincoln might not be as daunting to USC after that earlier success.

Still, Carroll is prepared for a big challenge against the hungry Cornhuskers. He is familiar with the Nebraska tradition, having experienced it firsthand earlier in his coaching career when he was an assistant at North Carolina State.

"Obviously, it's a very difficult [place] to play," he said. "I know historically it's an extraordinary crowd. They've got a great following. It's going to be a fantastic challenge for our young guys to handle it, deal with it well, perform like they're capable."

The 2-0 Huskers have soared to No. 14 in the rankings after victories over Nevada and Wake Forest. It's their highest ranking since reaching No. 12 midway through the 2003 season under Solich.

That was the season that Nebraska's 9-3 record was deemed not good enough, and Solich was fired before the Alamo Bowl. The Cornhuskers' subsequent victory in the bowl game boosted them to double-digit victories for the last time.

Even with all the subplots involved, Nebraska's coaching staff has tried to make Saturday's game not seem so big. But with all the surrounding hype, it's been impossible for some of Nebraska's players to keep from getting caught up in the Trojans' visit.

"You see it on the schedule and the caliber of team that they are," Nebraska cornerback Cortney Grixby said. "It's hard not to look ahead. You try to focus on not doing it, but it's here now, so it really doesn't matter. We just have to play."